Much of my career at NRAO has been spent replacing Carl Bignell's software. This might be one of the last pieces of his code that we'll be re-writing. Maybe we'll get it done before I retire. The Operator's Log tool, or Opslog, is what the Operators use while on duty to log what occurs during observations. Their supervisor also uses this tool to manage this information and make sure all the time accounting jives with the DSS and subsequent reports to the NSF. Could say a lot more here

We are using the same server and client technologies as the GB PHT project, so for the basics, see those docs at GbPhtDocs. Very briefly, here's some big differences between the GB PHT overall design and Opslog: 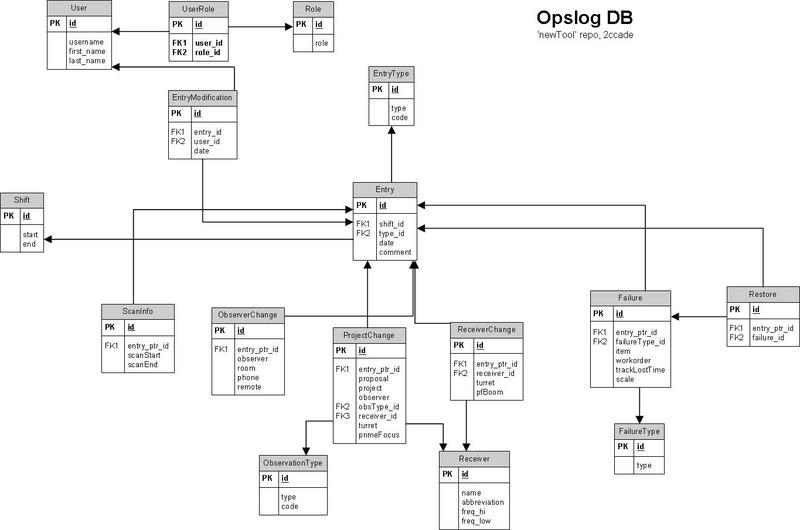 As mentioned above, this Django/ExtJS application is unique in that the client side changes 'viewports', or screens. In addition, the old opslog tool did not make a distinction between user authentication and selection of a shift, it was just all one 'login'. We are making that distinction, and therefore are pointing out our design here. 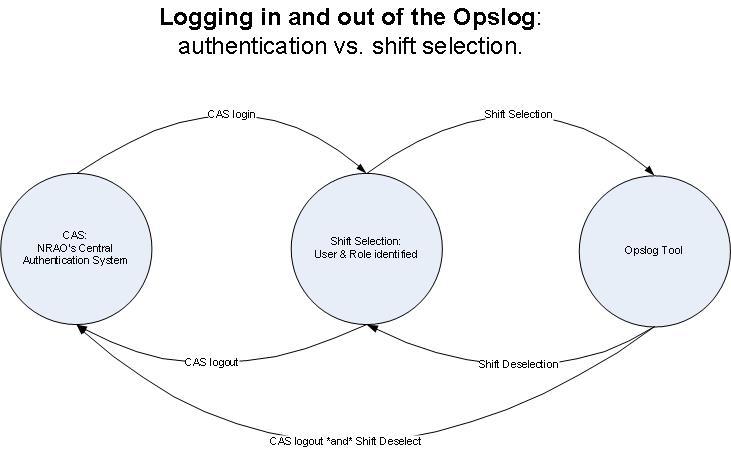 The UI consists of many interacting parts, and the fact that the list of entries is really a collection of different types complicates matters anymore. Here's some stuff from the visio doc that might help: 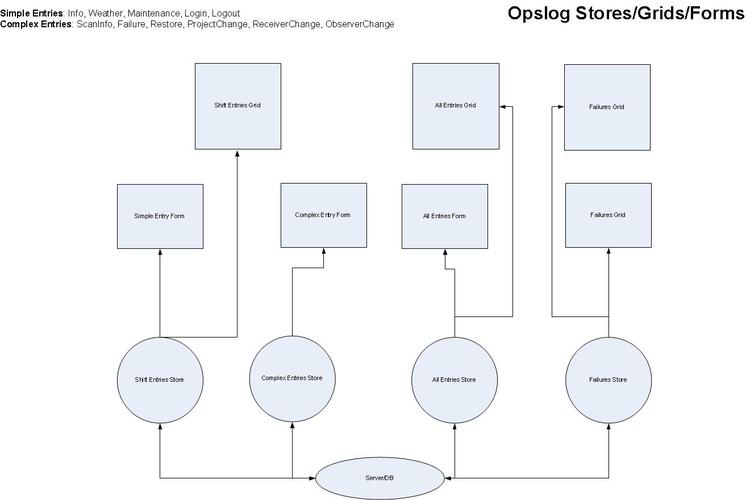 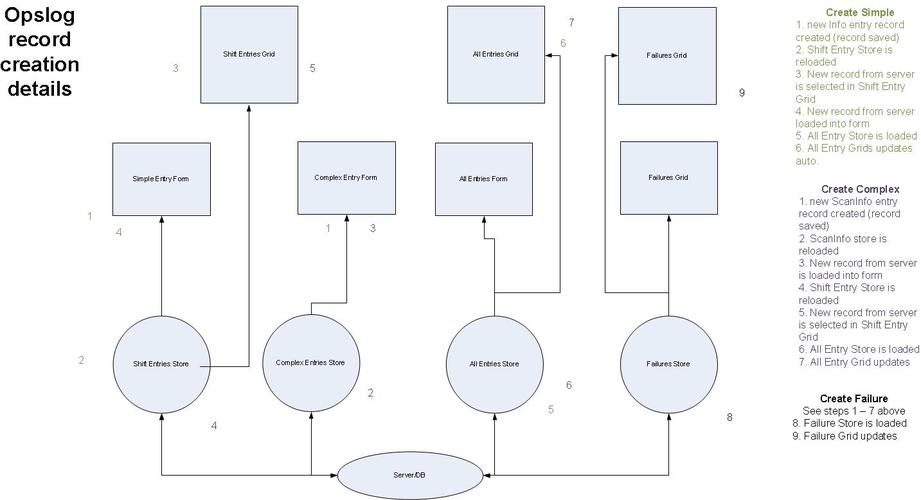 The way reports are created is pretty non-trivial. Here's some stuff to help understand it: 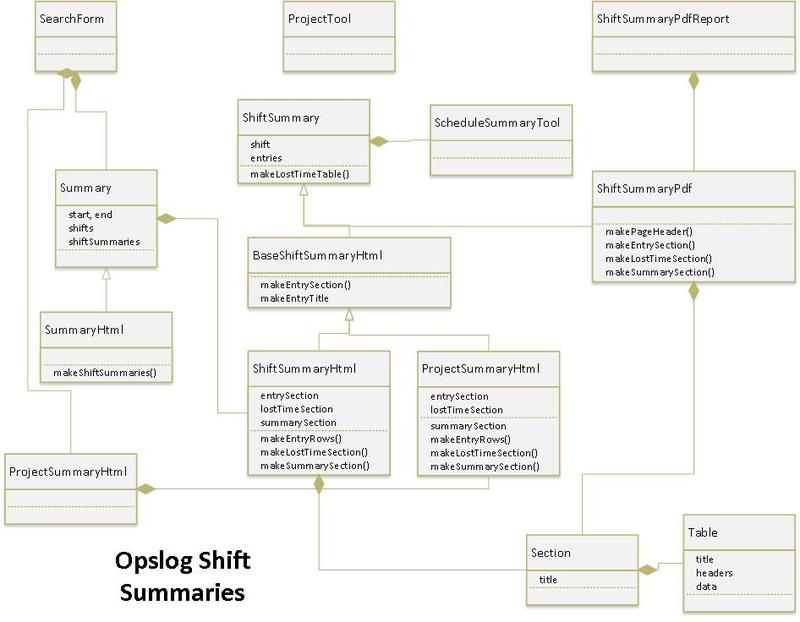 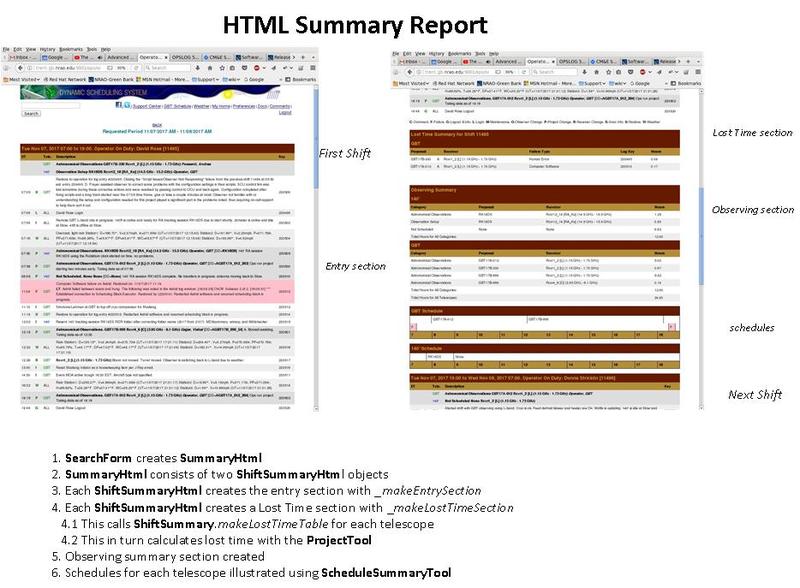 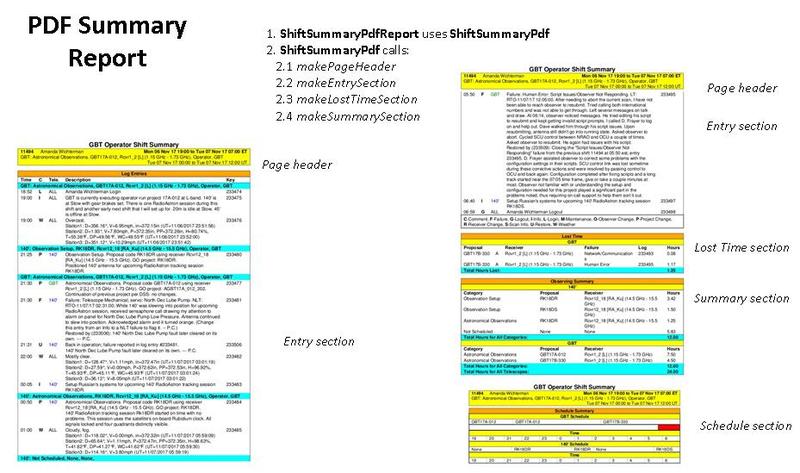 We've started a stand-alone Django project, uncoupled from the DSS for the time being. The bare repo can be found at: /home/dss/integration/newTool-bare Once we're at a good stage to start thinking about coupling functionality with other parts of the DSS, we can simple copy of the 'ops' Django app to the nell Django project.

Hey, what ports are the development servers going to use? How about:

We will be making releases using the same mechanisms used with the DSS. In addition, for test releases, we will attempt to create stand-alone, working versions of each release, leaving each release in place for reference as the project progresses. Some details:

Here we'll give brief instructions for how to test, and a summary of the release versions and where they live.

Nothing much new here. Basically follow the steps in section 4.3.2.1 (#4.3.2.1_Release_0_testing_instructions) However, after playing around with a shift for a while, and creating a number of entries, make sure it's summary page looks correct:

Before we get into specifics, it should be noted that this current release has all the features we know of that we were asked to include from Carl's tool, plus a few new ones that we've introduced. So, in a general sense, the instructions for testing could be 'use this like you would Carls tool, or at least try to'. The one big exception is that we've introduced multiple telescopes; a note on that below. Note on Multiple Telescopes: this is the only major new feature that was not in Carl's tool. For that reason, all the ways to use multiple telescopes haven't quite been worked out yet. This release is our first pass at something we think might work, so let us know what you think. Anyway, here's how they work:

Here, we pretty much sum up the instructions we've given for previous releases (above):

Here, we pretty much sum up the instructions we've given for previous releases (above): Special Note about Opslog tool and the DSS We have tried to integrate parts of the DSS into the Opslog tool. One of the aims of this new feature is to avoid accidentally introducing information that is different from the DSS schedule. You can still do this, but the opslog will warn you about it. Because testing is being done with a separate database from the DSS production system, we needed to provide a schedule for testing that was completely fictitious. This schedule simply repeats itself every 24 hours, with Maintenance every day from 8:00 - 15:00.

There have been several enhancements to the way forms are validated. The biggest change is that only the telescope, date, and time are required to be filled in correctly when you save an Entry. All other fields will indicate their validity status with a red box, but will not prevent you from saving. More on this in the next section. Proposal, Project, and Observer are now only required only when the telescope is the GBT Receiver is now not required for Maintenance Project Changes There are now two types of Maintenance observation types: Scheduled and Unscheduled Changing the observation type to either type of Maintenance will change the Proposal to Maintenance. It is not possible to auto-fill going the other way (Proposal -> obsType) since there are now two Maintenance obsTypes, so just remember to fill out the obsType first.

Now that Entries are not fully checked for validity at save-time, we needed some mechanism to ensure that they are correctly filled out when the user logs out. So, when you go to log out now, each entry in the current shift will be "validated" -- that is, each field within it will be checked for validity. If any of its fields are invalid, an entry will be marked invalid. This will be designated by red text in the log view shift entry list. If you have any invalid Entries, you will be alerted and given the opportunity to return to your shift and correct them. After you have corrected an invalid entry, you can press the "Validate Entries" button to re-validate all of the entries.

You will now be given the option to generate a summary of your shift upon logging out of it. This will create and open a Shift Summary PDF for you, which you can then print out.

The web-view of the shift summaries has been updated. There are some visual enhancements, and you can now search by ID. It will also now limit the number of days that you can generate summaries for (to avoid terribly long load times).

This now lists Observers by "Last Name, First Name" rather than "First Name Last Name". This allows you to search by last name, rather than trying to remember what an observer's first name is based on their first initial/last name. As an aside, please use the "Operator, GBT" user when it is an operator running the observation. This will help us keep track of things better. In the future I hope to greatly enhance the name matching capabilities of this field, but for now we hope that this is a good compromise.

It came to my attention early on in the project that you (the operators) will typically create Project Changes for at least some of the scheduled DSS projects. This is done by looking at the DSS schedule and manually typing in the relevant information. I finally found some time to implement a feature I've wanted to give you guys, which is a button that inserts all of the scheduled Project Changes for the current shift (Create Scheduled Project Changes). The button will only create new Project Changes; if a Project Change already exists that is similar enough (same proposal, date, and shift) to one that exists on the schedule, it won't be created again. The Project Changes that are created are just like any Project Change you would create by hand, so if you need to edit them you can do that. Also remember that if you need to delete an entry, you can do that via the right-click menu. Here's how this works: For every Project listed in the shift timeline (at the top), a Project Change is created. It is always populated with the Proposal and the Observation Type. If there is only one Receiver listed for that project, then it is filled in automatically as well. While there is observer and project ID information in the DSS, I know that the actual observer/project isn't known until the observation starts, so these are left blank.

Previously Modified Dates were not being updated upon saving a form, but rather only after refreshing the page. This has been resolved.

Previously, when you logged in but did not have valid credentials (because Paul or I messed up that step of the release) you were greeted with a blank white screen. You will now be directed to the proper "no permissions" page, so that you at least know the cause of this. Note that this should never actually happen, since you should all have the proper credentials to view the opslog.

Not sure if anyone noticed this or not, but when you selected a shift that was sufficiently far in ID from the currently selected one, the box would break, and you would no longer be able to use the next/previous/current buttons. This has been resolved

5. How to Import Old OpsLog Data into the New Opslog

We had to use a tool called dbfExport (from dBase) in order to successfully retrieve all of the old OpsLog data. The export tool developed by SDD was unable to read the datetime columns correctly. It also had issues with the .MDX index files, if I recall correctly. This is a Windows-only application, and it is currently installed on the SDD laptop HADDOCK. Paul Marganian, Steve Tritapoe, and Thomas Chamberlin have the license and password for activation. Using dbfExport was rather frustrating, but we were able to settle on a workflow. The .csv files that are output by dbfExport are unable to be read by Python's csv library, so that was a dead-end. However, it is able to output Excel files (.xlsx) without issue. I initially tried to read these with a Python library, but it was terribly slow. So, we settled on the following workflow.

You will need to do this for both the logentries.DBF and shifts.DBF files. You will need to ensure that the associated .DBT and .MDX files are copied over along with the .DBF files, and available in the same directory.

Using the scripts ImportLogEntries.py and ImportShifts.py in ops/tools/legacy it is very easy to import the .csv files into the OpsLog. You will first need to prepare your database for the import. This will involve creating a fresh copy of the DSS DB and running ops/tools/{opsStatics.py,setupOperators.py} on it. However, this will change once the OpsLog is integrated into the DSS release.

Prepare a new DB to import the CSV files into

This is for adding the legacy data from the CSV files into a nell (dss) database - therefore, you can't hold on to any ops data you might have there. You have to delete it.

Start with copy of production DB

The above lines are in the clearDB function of nell/resetDB script.

OR: Start with a fresh DB

How to Give a User Access to the OpsLog