The Mustang 1.5 firmware is producing data that needs to get off the Roach board somehow and onto another machine. How to do this?

The way the other Green Bank FPGA's work is they get their data off the Roach via a 10 Gbe connection. This is done directly in the firmware and there are Casper tutorials for how to use these blocks. However, for various reasons, this is not an option for us. We have to utilize the 1 Gbe port on the Roach, even though this is really limited to about 10 MB/s. Here's the elements of how we are trying to do this:

According to DaqReadoutMrM2, the required data rate for Mustang 1.5 for full demodulated data is 41 Mbps for the instrument, which will likely include 2 ROACH boards. Therefore the required rate per ROACH is 21 Mbps.

As a result of a data transmission meeting held May 30, 2013, we have defined our data packet to be in this format:

Timestamping will be done with a frame counter, as it is for GUPPI, VEGAS, and DIBAS. The frame counter is zeroed out on the first 1 PPS tick after the Arm() command is issued (which sets an "ARM" software register in the firmware) when the scan starts. Between knowing the start time, how fast the instrument is running, and the frame counter you can generate time stamps. The counter gives you the fractional part of the second, in units of the FPGA clock, then the computer adds the integer number of seconds to this calculated fractional part. In more detail, the main computer controlling the observation would know the time that it armed the instrument to within a few milliseconds. It would know that the 1 PPS happened after the arm() command, and for packet counter == 0, the time at start of the scan is: floor(Tarm) + 1 second For each packet, then, the time on the packet is Tp = floor(Tarm) + 1 sec + (Packet Counter * resolution of Packet Counter) The main computer starts saving the packets when the packet counter starts over at zero, but the packets are streamed all the time to the computer so you can see the data between scans. Another use of the frame counter is to detect dropped packets, so that you can handle it accordingly in the data capturing software. 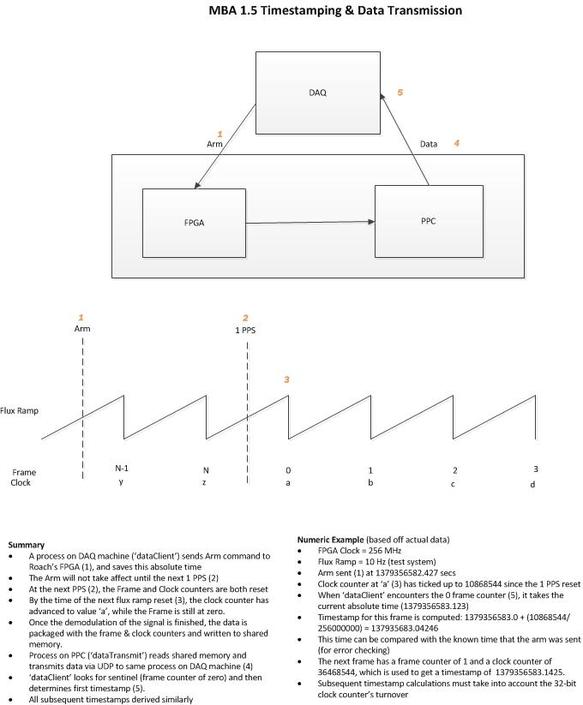 The 'ping pong' method described in the overview has not been implemented in the real model yet. Instead we are using separate models that simulate our output. Models are in /export/home/ptcs/scratch/models/mba15/mdls.

Here is a brief description of ping_pong_bram_counter.mdl, our first attempt at a mockup of what we want the firmware to do: So, this is a pretty good simulation of how we want to implement things in our real model, except for the following: So, if you set the ttl_rate to write out data at 1 Hz, you can use 'hd' to watch the software registers toggle and increment, and watch the first 8 bytes of the BRAM's increment appropriately as well. 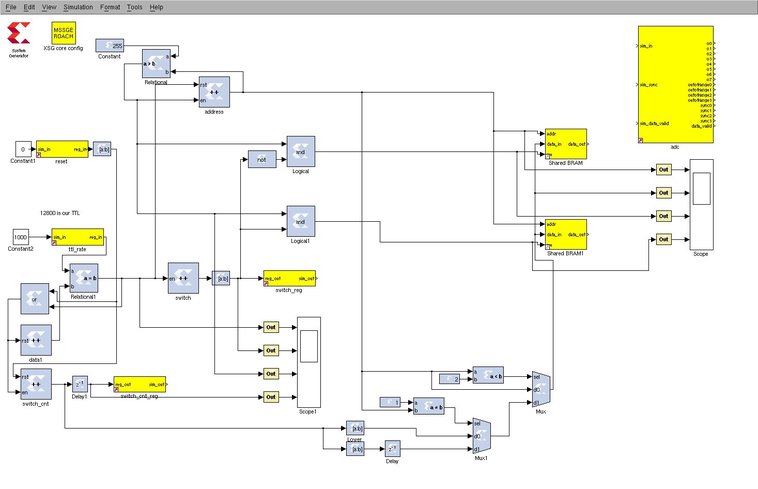 We have created another set of models that comes closer to what we will need to implement in the firmware. See the series of models entitled: ping_pong_bram_vn.mdl. These models use a lot of the same concepts (and blocks) as the model mentioned previously in 4.3.1, but improvements include: For testing, there is also a corresponding Python class in /home/sandboxes/pmargani/mba15/scripts/ChannelizerControls: PingPongBram.py. Here's some example usage: TBD: - the firmware doesn't always work when you reconfigure with different # of channels and packets. You may have to restart the bof file and this python class.

We also implemented some tests in a stand alone c program, which took a lot of it's motivation from the tcpborphserver2 code mentioned above, and the udp demonstration code Paul Demorest shared with us via John Ford. This stand alone code can be currently found at /export/home/tofu/cicadaroots/vegasbof/paul_devel/c_test AND paul_devel/dataTransmit (TBD - check this code in somewhere?). The latest stable working version is in dataTransmit. An executable can be built using =gcc pI. -g -Wall 'files.c' -0 'executable_name' = on the Roach PPC.

Conceptually, the method for reading the data is simple: treat the software registers and shared memory like files and use open, close, read and lseek to to manage this data that exists in /proc/