The GB PHT is used to prepare GBT proposals from the PST for the TAC meeting and subsequent scheduling in the DSS. Like the Sensitivity Calculator and the Scheduler's tools, the GB PHT consists of two parts: a web server implemented as a django application (in the nell git repository), and a client web application. Here the distinction is that the client code is not implemented in GWT, but in extJS's javascript, and lives right in the static directory of the 'pht' application in nell. This graph summarizes the GBPHT's role in the life cycle of a proposal. 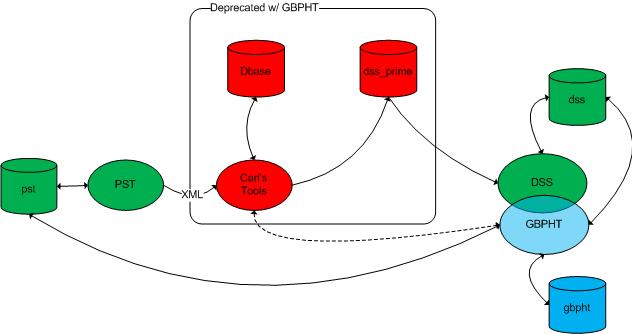 As mentioned above, the GBPHT server was yet another django app in our 'nell' git module (alongside users, scheduler, and calculator). It has a similar collection of models, with similar set of tables as the models/tables defined in the scheduler and user apps, except these tables all begin with 'pht' (ex: 'pht_receivers). Many of the overall patterns are also the same. A big distinction is that the GET/POST patterns implemented are distinct from the other nell apps in order to work correctly with the client javascript we developed (see below).

Like other DSS Django applications (scheduler, users, calculator), the pht applications data is defined via 'models', which are basically python classes that Django uses to construct your relational DB. The link displays the tables created by the models in our pht Django application. https://staff.nrao.edu/wiki/pub/GB/PHTool/DataSources/gb_pht_database.pdf

With the server running on port 9001, the following URL, http://trent.gb.nrao.edu:9001/pht/proposals, gives you a whole bunch of JSON, that looks a bit like this: where "proposals" is a list of JSON objects that look a bit like this: How does that work? How do you get Proposals in a JSON form in your browser when the persist in a database on the server side? Here's the trace: Much of the objects residing in our DB are directly accessible from the client via this RESTful interface (the formatting of the URL, the packaging of the data, etc.) There's also lots of URLs that provide different services and don't follow this pattern.

We implemented the GBPHT's UI as a web application using Ext JS. The library lives in nell/pht/static/js/lib, while our application code lives in nell/pht/static/js/pht. Here's the great docs! We learned how to work with stuff from the great [http://docs.sencha.com/ext-js/4-1/[][docs]]. You can make sure you're using the right docs for the version of Ext JS you're running by running the django server and pointing your browser at ? Examining the directory structure of nell/pht/static/js/pht. gives you an idea of how the Ext JS stuff works. There you'll see these directories: This is a bit like the MVC patter. Models and Stores (M) define data structures and how they are sent and received from the server. In view we define the actual widgets that the user sees (V), and the controller (C) specifies how the interactions work. We'll review each of these layers really quickly:

Each file in nell/pht/static/js/pht/models is a distinct model, and is based off the JSON served up from the server (see above). For example, nell/pht/static/js/pht/models/Proposal.py: Note that the fields match one to one in our Proposal JSON. The proxy is where we tell Ext JS how this models get populated from the server. Thus we specified 'rest' for type, and the url points to '/pht/proposals'. This took some experimentation to get right when we first got up and running.

Stores explain how the models are stored on the client side. Not much to say here, because usually most of what you specify in the store we specified in the model's 'proxy' field. Here's /pht/js/static/pht/store/Proposals.py:

Here's where things can get a little more complicated. Everything that a user actually sees in the UI is defined in /pht/js/static/pht/store/view. Furthermore, this directory has subdirectories so that related widgets can be grouped together, for instance the proposal dir. has code for the Proposal Explorer, or grid, and other specialized tools for the proposals. Let's take as Allocate.js as example. Here we define a widget that extends PHT.view.proposal.Edit (in Edit.py) that in turn extends PHT.view.FormPanel. This eventually extends Ext.form.Panel. Inside the Allocate class you can see we define our actual form fields (checkboxes etc) and our 'save' button. The loading of this form and the results of hitting 'save', following the MVC pattern are the responsibilities of the Controller.

Here's where things get really complicated. Gluing the model and view layers together is the control layer. In nell/pht/static/js/pht/controller/ we have files corresponding roughly to the controllers for various view sub-directories. For example, we have Proposals.js. AT the top, we can see that we define what models, stores, and views we'll be needing. Then, in the class's init function, we map actions to functions in our class. So, our 'save' button from the Allocate form has: Further down, we see that this allocateProposal function gets into more standard looking javascript actions: navigate the DOM to get a handle on the form that has our values. From the values, we get the identifier of the proposal, and use this to get the actual model of this proposal (the data!). This is done by doing a filter on the store, which allows us access to all the proposal models. After this, we have our bussiness logic, which in this case, means setting fields in the retrieved proposal (and session) model (or object if you like). Then, we send these changes down to the server so that they'll persist in the DB by calling the 'sync' routine on our store. Of course, its way more fucking complicated then this, but this is the high-level view of it all.

4.5 How does the Java Script get loaded?

Here's the path I trace for the pht:

Let's get back to that cool picture from the beginning:

This is actually a little misleading (it was made at the beginning of the project). A more accurate graph is taken from the PHT Project Note 3 memo: 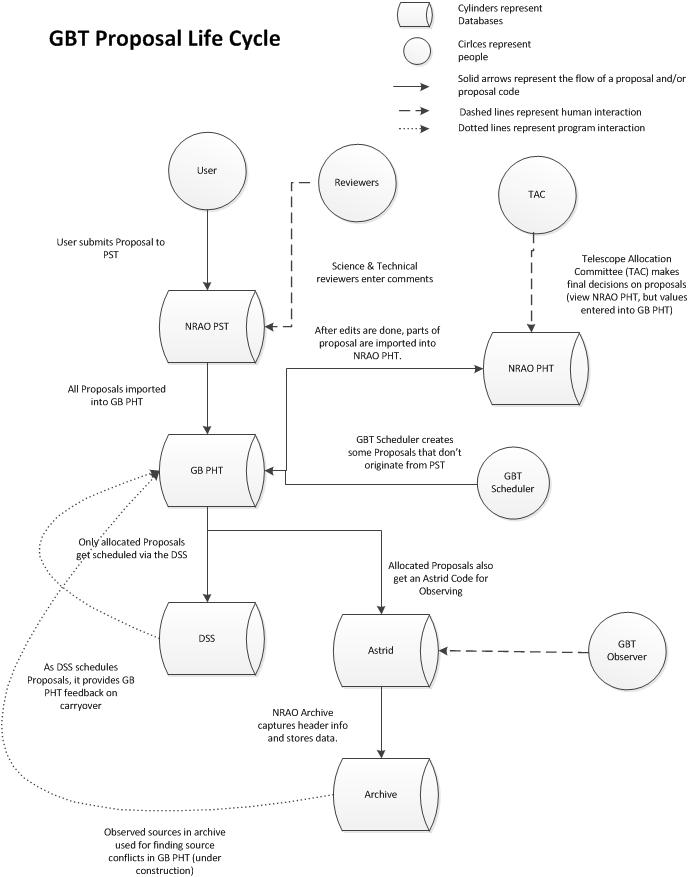 A whole lot can be said about this and the proposal life cycle, but what's important to the software engineer? The interfaces: what they are and how they work.

Here's what normally needs to get done before the TAC meeting to make sure the NRAO and GB PHT are working well together:

Basically, you want to spot check the same stuff you did in the NRAO PHT test system, just to be sure. And, of course, you'll have to do the same imports all over again:

This section is out-dated This part sucks. There is a long history of how the pressures in both tools have been tested against one another. Here's a listing of some of the methods used: Lessons Learned: Don't forget that NRAO PHT does not compute remaining time, instead we send this to them via a file of 'availability': a CSV file where each line has three weather values for the availability of that LST.

A simple Django app that serves a simple ExtJS client has been created to make some of these patterns a little more obvious. It can be fount at: https://safe.nrao.edu/wiki/bin/view/GB/Software/HowToUseExtjsWithDjango -- PaulMarganian - 2013-01-16