The following diagram shows the current design implemented for flagdata. As you can see:

We think it is useful to have this diagram as starting point, so that we can map the re-desing requirements with the classes and methods in the current implementation that have to modified. 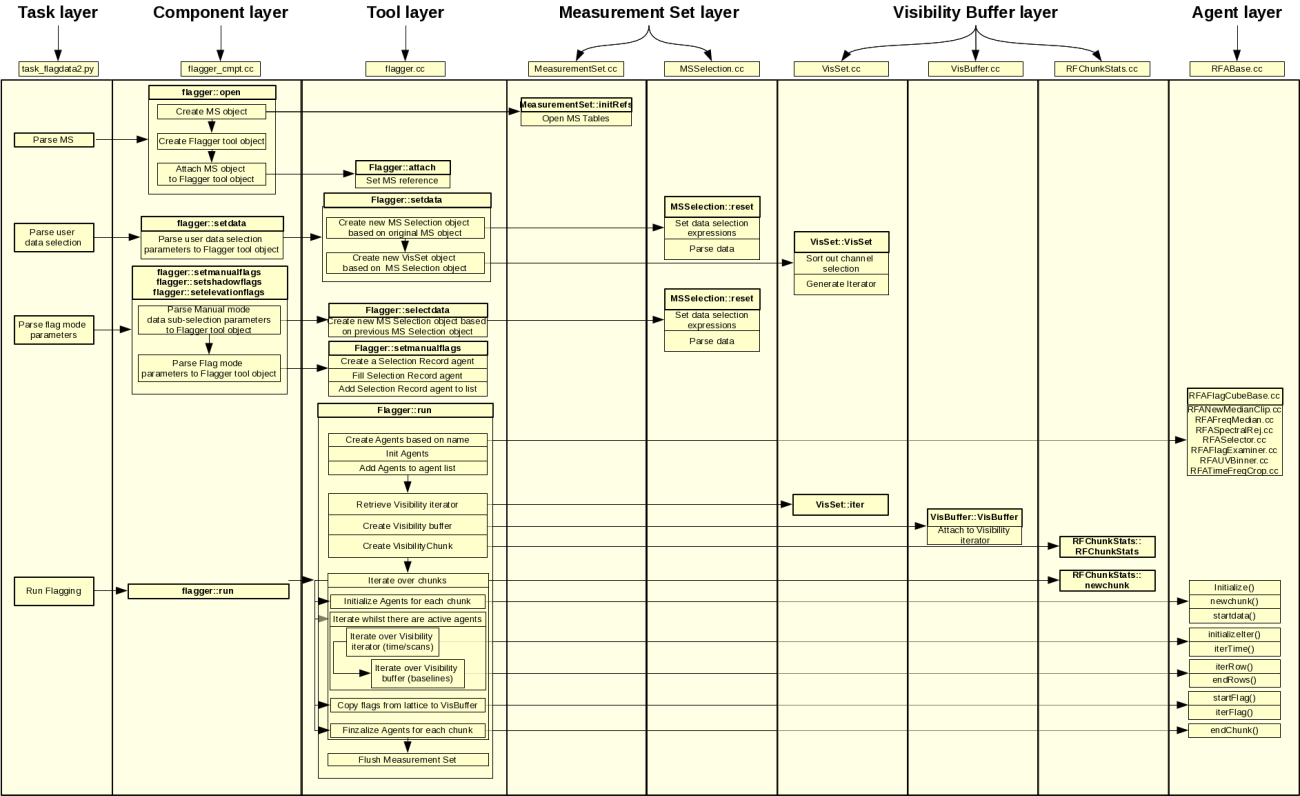 The following list of requirements comes from the first iteration, started by Jeff Kern, in which the main goals were set. Shortly afterwards this list was extended and complemented in a second iteration by Urvashi RV. Additionally we include our comments in order to determine how the top level requirements can be broken down and mapped to new classes and methods.

Requirement 1: Refactor data handling encapsulating all the functionality in one single class generic for MSs, Single Dish and Calibration Table.

when selectdata=true, every mode will flag only scan=3. Since manualflag has its own selection parameters, it will manually flag only channel 1 of spw 0 in scan 3. The whole scan 3 will be flagged using RFI mode instead. I guess you want every other mode to do the same as manualmode already does in flagdata2, is this correct? In order to do that, we will need to include selection sub-parameters to every mode as it is now for manualflag. Is this what you want?

Sorry, I meant rfi when I wrote clip. But a better example would be the following, in which case, it will manually flag only channel 1 of spw 0 of scan 1 and rfi flag scans 1,2 and 3.:

I don't know if the users have been complaining about the complexity of flagdata2. Remember that less than a year ago, they requested flagdata2 to have this interface (CAS-2281, CAS-2249). A couple of months later, flagcmd was requested (to be based on flagdata, NOT flagdata2); this was described in CAS-2416. In our understanding what the users want now is to be able to write flagcmd inputs with simple data selection syntax, which internally (transparent to the user) will be optimised in the data selection layer. Is this correct? Here are our comments/questions.

The flagcmd task will make the union of the above selections. In this case the union will be:

This selected MS will be used by all agents. Each agent will loop through only what it needs to. For example:

- The rfi agent will loop through scans 1~5 and all spws in the selected MS.

- The quack agent will loop through scans 8~10 and all spws in the selected MS.

- The clip agent will loop through scans 2,3 and all spws in the selected MS.

If this scenario is what you have been describing, we can propose the following.

- MS will be read only once (using the union of all user data selections).

- Each agent will independently loop through the selected MS using only the portions of data it needs to. This will be useful if we want to parallelize the work in the level of agents. If it happens that at least two agents are much slower than the others, the gain will be noticeable.

Requirement 3: Ensure we only iterate through what we need to.

However, do you think it is better to use independent iterators/visBuffers or a common one? We came up with this idea of independent iterators/buffers because maybe for some agents it is better to iterate over some kind of chunks (e.g. (scan,SPW)) and for other over some a different type of chunks (e.g. (only time/scan)). Maybe the gain for each agent is not so relevant and there are some drawbacks (e.g. more memory usage). Let us know what approach you think is more convenient, we can easily change the design at this point.

The only advantage of the old way (iteration was done one timestep at a time) was uniform access patterns, and agents could accumulate any way they wanted - different time-ranges, or overlapping time-ranges for sliding-window filters. But, all agents then had to keep track of flags separately, no one used these options, and it was hard to debug.

Requirement 4: Switch to Jim Jacobs Asynch IO for the iteration through the iterator

Requirement 5: Introduce in the new Flag Data Handler the functionality that used to be in the Data Mapper (but with better syntax)

Where parameter can be an enumeration

Keeping polarization separate will eliminate one layer of flag-translation. In what you've described, the flag-handler will have to do things like : If the agent is flagging on Stokes I, then translate flags to RR and LL correlations.The old code did this, and there were 3 problems:

(i) It had expressions the user could set (in reverse polish notation), but this was not generic-enough for arbitrary expressions that some newer algorithms need.

(ii) It did not allow access to the complex visibilities.

(iii) If flagging was done on Stokes I, agent flags would have to be translated by the flag-handler into RR and LL. This extra layer of translation was not helpful while debugging, and agents were not allowed to flag what they wanted (for instance, detect RFI only on RR, but apply flags to RR and LL.

I think it would be cleaner to let each agent deal with these expressions separately. dh.getView() should just return a Cube of the chosen datatype ( Float (abs,phase,real,imag) or Complex ) with time/freq/corr on the three axes. This way, the flags will be of the same shape, and the flaghandler will not have to do a flag-translation (reduce the number of steps). I don't think this will spread complexity to too many agents, because it is only Clip and Autoflag that requires the flexible expressions. Each Auto-flag algorithm will require a different thing -- so it's simplest to let the agents handle it internally.

For (4) and (5), how do you plan to translate the single Matrix of flags to multiple correlations ? You could use the rule of "flag all planes that were touched in the expression". But, that still does not allow you to look for flags from RR, but apply flags to RR and LL...

The only use case I can think of for (4) and (5) is Clipping, and the behaviour of "flag all planes touched in the expression" is a very good default.

Bottom-line : I do not see an advantage of having the nice parser for anything other than Clipping. This is mainly because of the complexity it introduces in handling the flags, which seems unnecessary since agents can generate (3),(4),(5) from (1),(2).

Can you see a clean way to deal with flags ? This is what the old code attempted to do, and this is one of the reasons for trying to make it simpler now. It wasn't used, and wasn't easy to debug when given a dataset with all kinds of varying shapes, with missing data, or data with values exactly equal to zero, which should sometimes be treated as 'flagged' and sometimes not......

See the function LightFlagger::readVisAndFlags(), and how I deal with uneven nbaselines there.

I would prefer having only (1) and (2). If it's easy to put in, the mathExpressions could be useful for some kinds of flagging, but...

Requirement 6: Modify the flagStructure from a boolean to a bit array so each agent will have it's own bit

Requirement 7: The agents should all be derived from a common base class with a run method generic for all kinds of data (Ms,CalTables,SingleDish)

Requirement 8: Port Quack, Manual, Clipping, and Shadow agents to the above framework

The following is a detailed design diagram of our proposal, including pseudo-code. The idea is to be as much specific as possible, because there will have interactions between at least 3 developers, coding at the same time. In addition we include a table describing the methods for each of the new main classes (Flag Data Handler and Flag Agent Base) so that we can have parallel developing: 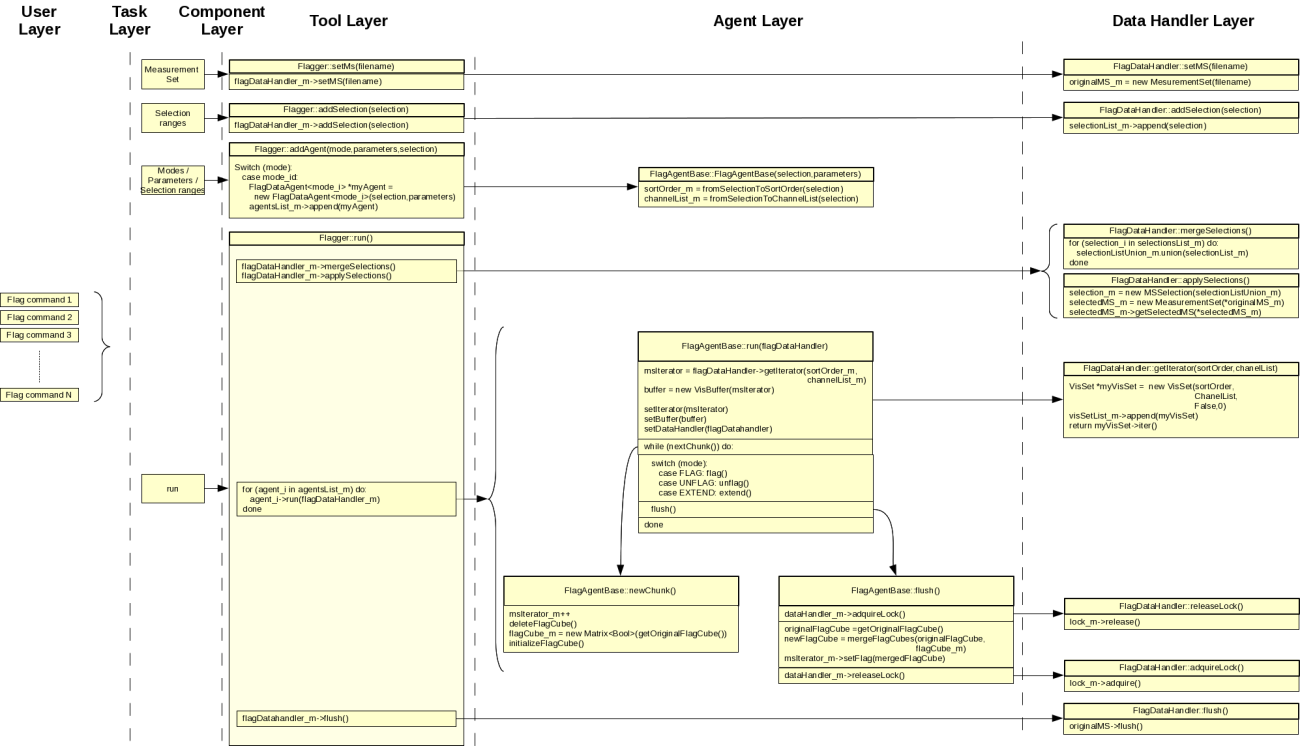 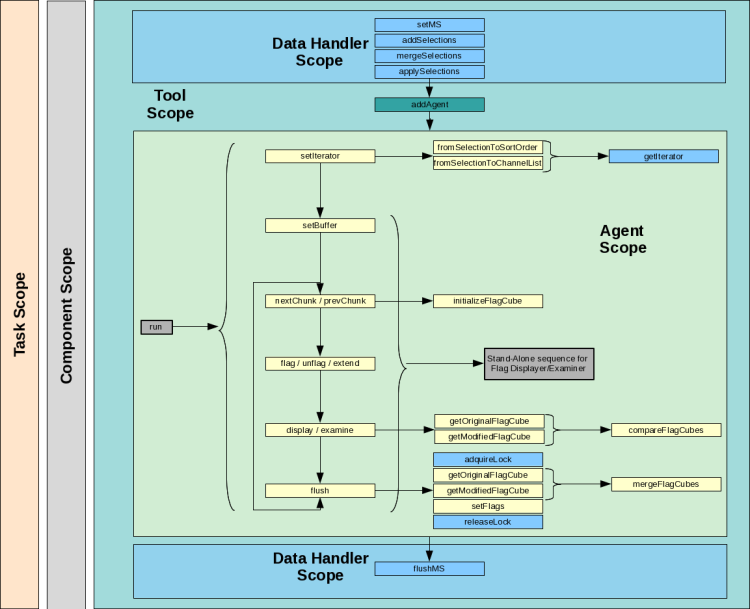 The following traceability table shows which class implements each requirement, and the corresponding tickets and developers in charge.