Branches and Flow of Changes

This diagram illustrates branches used in the CASA change control system, and how changes move between branches. This includes the CASA branch of casacore, code, gcwrap, and the ASAP repository at atnf.csiro.au. 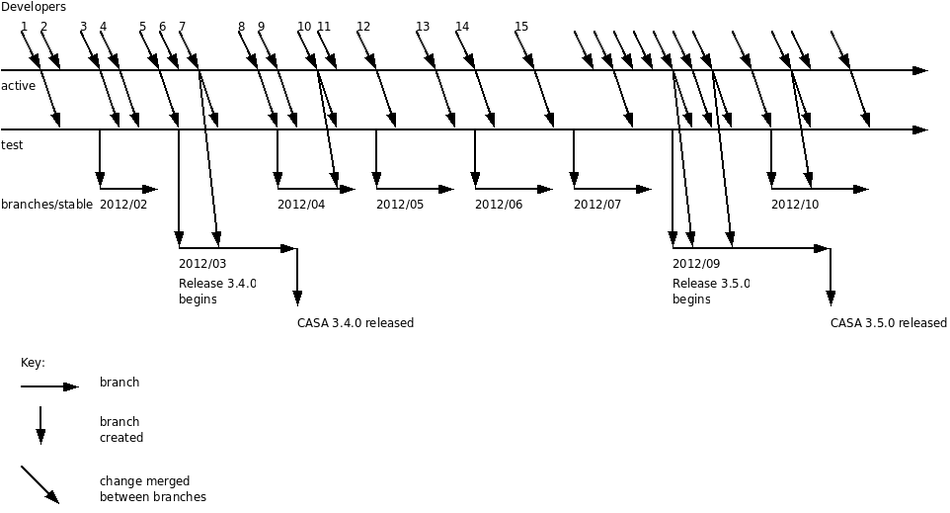 For ASAP developers, svn.atnf.csiro.au/asap/trunk corresponds to "active" in the diagram above. This diagram is a bit large, but it was useful to show two complete releases.

All new development and bug fixes must be checked in to: This is illustrated with changes 1-15 above. The only difference between ASAP, CASACORE, CODE, and GCWRAP is the Subversion repository changes are committed to. For ASAP, asap/trunk corresponds to "active" in the diagram above. Change IDs for any and all bug fixes that must be merged from trunk to the test branch, the current stable branch, or a new release branch must be e-mailed to the CASA packager. These branches are described below. Typically a developer should notify the CASA packager at the time the change is committed. If a developer needs extra test time to ensure the bug fix is sufficient, or the developer has a set of changes that must be merged together, the developer may notify the CASA packager later when the set is complete. All changes committed to ASAP, CASACORE, CODE, or GCWRAP are treated identically in the rest of the branching and merging process that follows.

Merging to the Test Branch

Branching and merging to Stable Branches

Branching and Mergeing to Release Branches.

When WesYoung decides to (historically, every six months, not long before the start of release preparation), he merges changes from http://casacore.googlecode.com/svn/trunk to https://svn.cv.nrao.edu/svn/casa/trunk/casacore.

Developers are allowed to create branches in: as needed. If developers want to merge code on these branches into CASA, they must -- ScottRankin - 2012-01-17