The notion of callers not having to package the dataset in a form the underlying stats class can understand is important. We have quite a wide variety of data structures for which stats need to be calculated. This suggests a hierarchical class structure should be used. Derived classes would inherit from a common base class which manages stats calculations. The derived classes would be responsible for converting a data structure(s) that are convenient for callers to use into the common structure needed by the parent class for calculating statistics. So, one could imagine a VIVBStats class that takes a dataset in the form of a VIVB and under the hood and efficiently converts it to the data structure the parent class requires. In this way, the code that does the actual calculations is centralized, and the specifics of greatly varying use cases can be specialized in derived classes. The design also eases the location discussion, since the base class can go in casacore where everything has access to it, and some derived classes, such as the VIVB version, can go in code since the VIVB structure is defined in code, not casacore. Each algorithm/filter would be represented by its own class which would be derived from a common pure virtual base class. The stats calculator class would be configured to use one algorithm/filter class at a time. When the caller called the method that triggered the generation of statistics on the stats calculator class, the stats calculator class would call a common method on the algorithm object to calculate stats, passing the selected set of data values (along with their possible weights) to the algorithm/filter object it had been configured to use. The common stats calculation method could take a begin and end iterator that span the data set. In this way, the large number of data structures which support iterators could be easily used, thus mitigating the need to transform one data structure into a specific type needed by filter classes. The design of the stats calculator class hierarchy along with the algorithm/filter plugin design makes this architecture simple to extend. So, because we cannot foresee all data structures on which we will need to calculate stats and all algorithms we may wish to use, support for these should be simple to add as the need arises. Our policies, especially wrt casacore, must be kept in mind when considering the use of third-party libraries. Algorithms/filters which require fitting can be included in the algorithms/filters framework. The level of encapsulation (eg whether or not to include fitting in a class representing a filter) should be based on the likelihood that such a filter will be reused. The code that is used by lattices for finding the median of a very large dataset can be found in LatticeFractile <T>::unmaskedFractile() and LatticeFractile <T>::maskedFractile(). It uses a binning algorithm. These types of algorithms seem to be common in computing quantiles for large datasets (eg http://www.stat.cmu.edu/~ryantibs/papers/median.pdf). I believe these methods only give approximate solutions, but for non-pathological distributions, the consensus seems to be that they are still very accurate if one uses a large number of bins. See also http://read.pudn.com/downloads169/sourcecode/math/779306/C13/MDIAN2.CPP__.htm for another possibility. 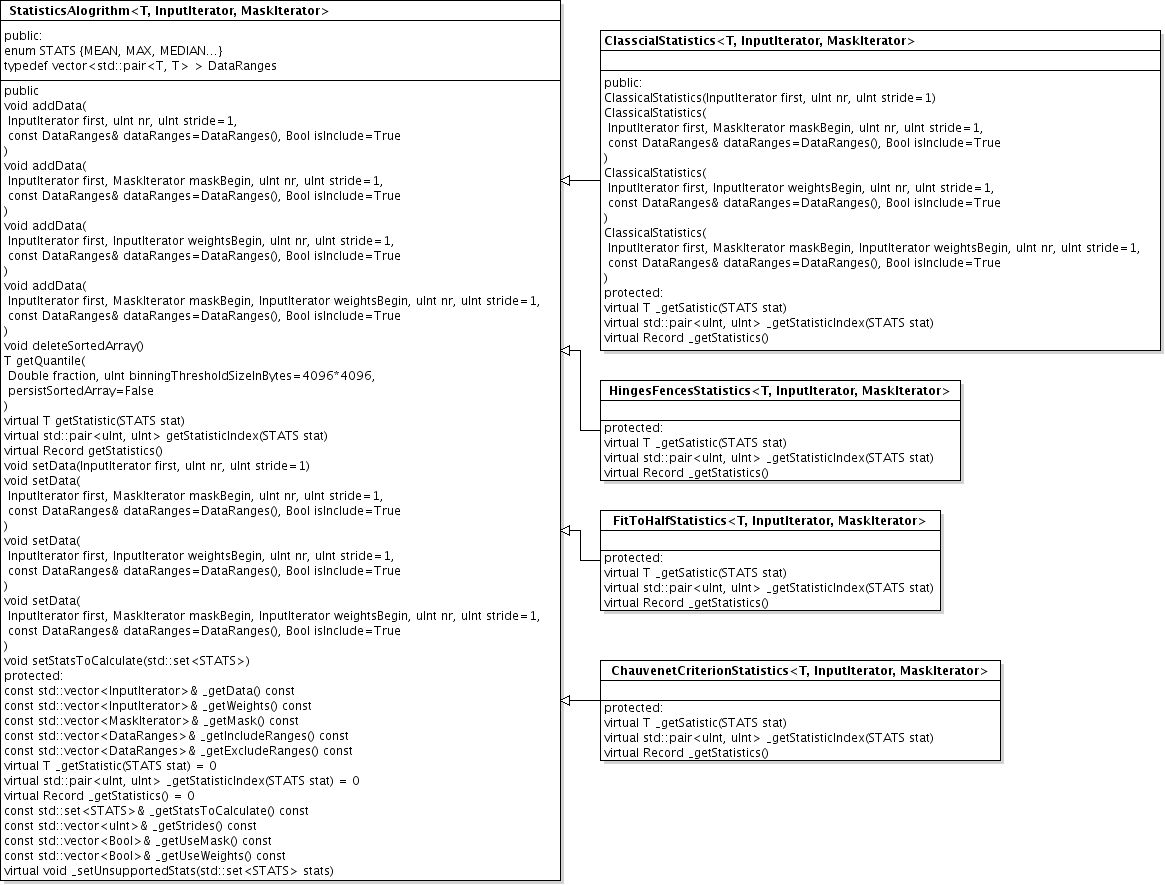 Relationship to Use Cases

Several use cases have been specifically declared. The general pattern is There are a wide variety of methods for transforming data, including using numerous fitting or other modelling techniques, using numerous smoothing or decimation techniques, etc. The large number of diverse possibilities prohibits design of a single framework in which all these techniques can be incorporated. Fortunately, the techniques used to calculate statistics for all these cases are relatively few and so lend themselves to be incorporated into a general framework as has been discussed in previous sections. In this section, I enumerate the specific, relatively well-defined use cases that have been discussed amongst the group and describe how the unified statistics framework could be incorporated into each of them.

Q1: How would algorithms requiring multiple passes through the data work? Do they just take the iterator and go back and forth through the data? A1: For the statistics that I am aware of that we want, "multiple passes" are only required in the case of "large" data sets for the computation of quantiles (eg median, quartiles, etc). In this case, a binning algorithm(s) would be used. My getQuantile() method allows the developer to specify a parameter, binningThresholdSizeInBytes. For data sets which have sizes exceeding this threshold, a binning ("multiple pass") algorithm would be used rather than copying and sorting all the data at once.

I've not committed to which binning algorithm(s) would be used; I view this as an implementation detail that will need further investigation regarding performance etc. In the end, it might even be best to allow the developer to specify which algorithm should be used. In the case of quantile calculations using large datasets, the exact quantile value is often not important, but rather a value that is "close" is good enough and the savings in computation costs in such cases can be great. So one could also imagine a design where the the developer could specify how close to the actual value s/he was willing to settle for. I am quite open to suggestions on what developers would find most useful in these cases. Q2: Does the algorithm need to know up front that it's being fed the data incrementally? A2: No. Statistics are only calculated upon a call to getStatistcs() or similar method. At that point, what ever data sets have been added via the addData()/setData() methods are treated as a single data set on which statistics are computed. Q3: Where would the STAT enumeration be located (e.g., is it particular to a type of stats or to the entire framework? A3: This is subject to modification depending on what I discover during implementation, but atm I'm planning on having a single public enum in a non-templated class (call it StatisticsAlgorithmData). For some algorithms, certain members of this enum would be nonsensical, and in those cases those statistics would not be computed and if those stats were requested via setStatsToCalculate() an exception will be thrown. Derived classes can set which stats they do not support via the _setUnsupportedStats() protected method which would be called during construction. Q4: Will the user select the particular algorithm or provide some information about their intent and let the lower-level code determine the appropriate algorithm (e.g., computing median when all data fits in memory and when it does not, etc.)? A4: My intent is to allow the developer to provide as much information as they would like to for guiding the computation, while also defaulting to doing something reasonable if they do not wish to or do not know what specific information to provide. For possible ways to handle the specific example you give, see my discussion regarding quantile computations above (Q1). Although I've not specifically added a way for the user to provide a specific binning algorithm to use in my design yet, this would certainly be doable at relatively low cost if developers want this functionality. This is one of the reasons why I greatly desire feedback; I want to implement something that our team actually wants to use and will use. There is no point in doing this if our developers do not use it in the end. Q5: The user gets an input iterator and an item count. Now they want to get the basic stats (e.g., mean and sigma). A5: If the user wants non-quantile-like stats, she doesn't need to call setStatsToCalculate(); she will get all stats that do not require quantile calculations by default. Quantile calculations are, in general, more complex and require either a (partially) sorted array or binning data to be created and held internally. For non-quantile stats, the code would look something like:
ClassicalStatistics<Float, Vector<Float>::const_iterator, Vector<Bool>::const_iterator > statsCalc(beginDataIter, beginMaskIter, n);
// calls ClassicalStatistics method, stats info contained in Record stats
Record stats = statsCalc.getStatistics(); Q6: The user wants the stats from a set of data too large to hold in memory. They create a loop to read in blocks of it, getting a count and iterator to the block of data. They want to end up with the basic stats again. A6: Again, for non-quantile stats
ClassicalStatistics<Float, Vector<Float>::const_iterator, Vector<Bool>::const_iterator > statsCalc(beginDataIter, beginMaskIter, n);

while (gettingChunks) {
beginDataIter = getChunk();
beginMaskIter = getMask();
uInt n = getNumberOfElements();
// a call to addData would have to trigger stats to be calculated on the previous data set
// because these are basic statistics calculated in a classical sense, only accumulators need
// to be updated internally.
statsCalc.addData(beginDataIter, beginMaskIter, n);
}
// Record stats holds stats info for the composite data set
Record stats = statsCalc.getStatistics();
Q7: As for number 6 but they want a quantile of some sort. A7: In this case, a sorted array would be held in memory, until it became clear that the array would be too large. This decision making could be short circuited by adding another method, setSortedArrayMaxSize() and specifying 0 or something small so there is never a sorted array held in memory, so that a binning algorithm is used from the outset.
ClassicalStatistics<Float, Vector<Float>::const_iterator, Vector<Bool>::const_iterator > statsCalc(beginDataIter, beginMaskIter, n);
statsCalc.setStatsToCalculate(Vector<StatisticsData::STATS(1, StatisticsData::QUANTILE);
statsCalc.setSortedArrayMaxSize(0);
whille (gettingChunks) {
beginDataIter = getChunk();
beginMaskIter = getMask();
uInt n = getNumberOfElements();
// a call to addData would have to trigger info for the previous data set to be binned;
// because we can only track binning info, the resulting quantile can only be approximate
statsCalc.addData(beginDataIter, beginMaskIter, n);
}
// get the desired quantile. This use case indicates the signature of this method, as shown in
// the current design, needs to be changed by removing the final two optional parameters.
// As noted previously, because all the data cannot be held in memory, only binning information is
// available, and so firstQuartile is only an approximate value.
Float firstQuartile = statsCalc.getQuantile(0.25); Q8: Same as number 6 but they want stats on each channel. A8: An ArrayIterator with a cursor that points to subsequent channels should first be constructed and used to step
through channels. If you mean that the data for a single channel doesn't fit into memory, well that's something
the user will have to manage with a nested loop, but the idea is essentially the same as I outlined in 2. above.
For modern machines and our current telescopes, I find it highly unlikely that a single channel worth of data
would not fit in memory; certainly our largest images do not exceed 8k x 8k x 4 (ra x dec x stokes).
Array<Float> arr = image->get();
ArrayIterator channelStepper(arr, IPosition(1, image->coordinates().spectralAxisNumber());
uInt chanNum = 0;