This page provides guidelines for using the CASA Continuous Build/Test (CBT) Servers (casa-jenkins and casa-cbts) to maximize the benefits of these servers for all CASA developers. These guidelines are consistent with the practice of Continuous integration, but are still useful if you do not practice Continuous Integration. Status: PROPOSAL Note: The table of contents provides an outline of the procedure to follow.

Allow Time for Your Change to be Built and Tested

Do not commit changes to change control just before stopping work for the day (or for lunch). A failed build, not corrected quickly, can slow down other CASA developers. Allow enough time for your change to build on the CBT server, for tests to run, and for you to check the results. Do not commit a change if you have less than the following time left in your work day. These are minimums. They will be adjusted based on observed build and test times.

Check If the Build is Healthy

See the most recent build on the CASA Production CBT server for the branch you are working on. Below is a subset of the Jenkins build history for the CASA Trunk. 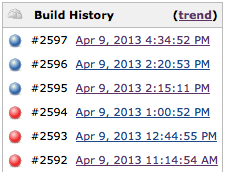 If the latest build is healthy, proceed with your commit.

If the latest build is broken, allow the developer responsible for the change that broke the build time to fix it. Check back in a few minutes and try again. The following practice is discouraged, unless you are fixing a build for someone else, as it can hinder the developer trying to fix a broken build. But, if you just can't wait for the broken build to be fixed, With this approach, you will lose the benefit of post build testing. If you do this, you are responsible for checking build results for your change and verifying your change did not introduce another build problem.

If Your Commit Failed

If Your Commit Succeeded