The following links lead to information and issue tracking for each of the ALMA Vertex antennas. This information includes:

Common Issues to All Antennas

On 2009-11-08 NickEmerson noted the following: On average the left side of the yoke of every antenna we've tested so far is approximately 2 degrees warmer than the right side of every yoke.  Do you remember, we also saw something like this on the prototype?  I think what we found was that there was warm air coming up from the pedestal through two holes in the floor of the yoke, one hole on each side.  On the Left side is where ALMA cables are run, and on the right side are Vertex cables.  The hole is maybe 6 inches in diameter.  Vertex has enough cables to practically plug this hole (on the right), while we only have a handful so the left side hole is mostly open.  So, my guess is (and I think we saw this on the prototype as well), the warm air is rising up into the left side of the yoke, but not the right.  Do you think this is important?  It would be easy to fix, we can just plug up the hole with some foam.  If this works and the gradient disappears, I calculate that it will change NPAE, on average, by a couple of arcseconds (but this should be compensated by the linear sensors so we wouldn't notice). JeffMangum suggested that he plug the left-side cable access hole to minimize any relative temperature gradients in the fork arms.

Tiltmeters Fail to Work at Ambient Temperatures Less Than 0 C

On 2009-11-07 noticed that on DV01 tiltmeters stop working when ambient temperature less than 0 C. Tiltmeters on DV01 are unique, but from same manufacturer as on other Vertex antennas. Not clear at this time if problem is just with tiltmeters on DV01 or common to all.

While analyzing first several all-sky pointing runs from DV06 noted that there was an excess of dS at low ZA (high El): 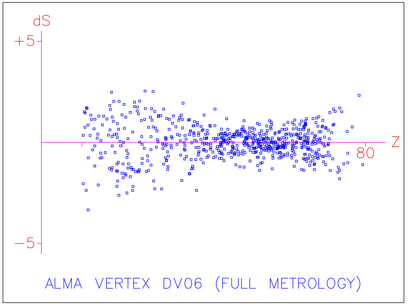 . NickEmerson suggested that this is due to local deformations of the transverse near the tiltmeter which are included in the tiltmeter metrology correction but are not structural deformations that produce pointing offsets. To try to verify this theory we tried several things: What is left unanswered in this analysis is the question: Why does DV06 show this excess dS at high E when the other antennas did not?. Several possible parts to this answer: -- JeffMangum - 2009-11-10