Last Update: JeffMangum - 23 February 2013 Table of Contents: AIV has done extensive studies of the gravitational and temperature dependence of the radiometric focus of all antennas. Extensive sets of measurements are posted to Comparison of Station 3 and Station 4 Focus Terms. 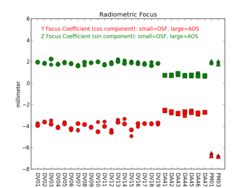 Radiometric focus gravitational dependence for all antenna types. Derived from results posted to the Station 3 and 4 Focus Studies wiki.

For the thermal model, AIV has been using a simple linear temperature dependence. AIV had also been experimenting with using various temperature sensors on the structure and on the weather station. See DV08 Focus Dependence on Temperature. When AIV makes a focus measurement they fit to not only the gravitational dependence but also the temperature dependence. A summary of these measurements is shown in the attached diagram. Note that the measurements at the OSF involve a variety of incorrect temperature sensors (like Meteo3) so cannot be trusted. On 2013-02-05 they were informed about the path length model (to account for the aluminum cylinder at the prime focus) in the SPEM document. Cristian Lopez and Ruediger Kneissl are implementing this model. Note that the measurements of the temperature dependence of the focus indicate that, for all DV antennas, that for a change of +1 C in temperature the focus moves away from the antenna surface. The FEA predicts, for a +1 C change in temperature, that the contribution due to everything except the aluminum cylinder should expand by about +5 micron. The aluminum cylinder, on the other hand, should move the focus toward the dish by about -15 microns. This results in a net -10 microns of focus change for a +1 C change in temperature. The measurements indicate that the focus moves away from the antenna surface by of order +40 micron of focus change per C (see Investigate Thermal Structure Changes of DV08 at AOS, and specifically the document Station 4 Focus Measurement Summary). Using the path length correction model listed in the SPEM document, for a +1 C change it predicts a focus change of approximately -14 micron. Using the FEA prediction of what the parts of the antenna from the cassegrain focus to (but not including) the aluminum cylinder, is described by the following: AB*0.8x10^{-6}*deltaT mm which, for AB = 6594 mm, predicts a positive focus change of about +5 micron. This results in a net prediction of -10 micron for the change in focus for a +1 C temperature change. It seems we have a significant disagreement between model prediction and measurements. It has been verified that:

2013-02-15 Ruediger 2013-02-20 Response to some of my questions... Are the AOS focus coefficients derived from focus measurements made over a longer time period than those made at the OSF? Yes, the majority of OSF data are typically taken within a few days, apart from cases where there are problems and the antenna is looked at for a longer period. These cases were probably also more in the beginning. The AOS is typically everything up to the time of the station 4 document, which again for the early antennas spanned 1 year or so, a few months for the later ones, I would say. Of course, this had to be looked at systematically with fits for different periods. What exactly are the details of the fit made to the data to derive the coefficients? Least squares or something like that? I think the example document for one antenna is helpful for this question. The fit is indeed least square and the full error covariance on the parameter set you know, including band offsets, is derived. In the beginning I rescaled the errors for a reduce Chi2 of 1 (as I had noticed that at least the total power measurement errors underestimate the scatter by a larger factor, sometimes close to 5, not so much the interferometric errors), which was dropped at some point, and then re-introduced, when I had been consulted again. So the errors may be a bit inconsistent between antennas. One more point I forgot to mention about the fitting. Since my initial work a step in the focus model fitting procedure had been added, which I am quite skeptical about, but which hopefully has no major impact on the results, just makes the error estimates more questionable. This is a removal of outliers after a first (initial) fit. I could never understand the justification of this (I believe it was an attempt to bring the formal errors into agreement with the residuals). I advocated instead a robust fitting and/or an attempt to quantify the functional form of the dispersion. What were the temperature sensors used to derive the temperature dependence for each measurement? If the weather station was used for the OSF measurements, which the AOS measurements used the temperature sensors at the apex, then that might explain a lot of the scatter in the OSF measurements. The early antennas use OSF weather station, the latter antennas and AOS measurements use an average of the temperature sensors at the apex. This would certainly have affected the temperature comparison. I think it is not affecting the problem with finding a Z focus T model at AOS and not the other coefficients YC, and even ZS as the fitting should largely decouples the terms, but it could be checked on the covariance.

DV01 and DV03 Temperature Dependence of Focus from Tower Holography

In the DV01 and DV03 tower holography measurements reported by Emerson, Schwab, and Napier (2010), a measurement of the focal length change with ambient temperature was made. The results were as follows: Emerson etal. point out, though, that as much as 10 micron/C might be attributable to factors other than the dish surface for the DV01 measurements, so these two measurements are in general agreement, within uncertainties.

The following is just a copy of section in my Vertex Surface Dependence wiki page According to Richard Hills, the X, Y, Z focus adjustment is indeed active during astro holography. The elevation-dependent corrections are used all the time and the necessary adjustment to the pointing is made. Richard mistakenly thought, though, that subreflector repositioning is not allowed during a scan. According to Ralph Marson: "The subreflector will be commanded to move whenever its current position is too far away from the optimum position. This can occur within a subscan. In my quick examination of the AstroHolo.py script I do not see any code to turn off this automated sub-reflector adjustment. Keep in mind that for holography measurements one scan is the entire map." This will allow for "glitches" in the amplitude pattern during an astro holography measurement due to the fact that the pointing offset goes in more or less instantly but the secondary moves more slowly. Subreflector positioning updates should really be completely turned-off for the entire astro holography run.

While reviewing the AIV measurements of radiometric focus for DV19 made at the OSF I found the attached plot of "mount sensor temperature" versus El. AIV-8532 notes that this variation of mount sensor temperature with elevation, which is a crude proxy for time as the source was observed from transit to a low elevation, is not consistent with the weather station temperature, which was apparently pretty constant at 11+-0.5 C. No further comment on the ticket regarding this observation. Solar loading? Their derived dZ/dT of 42+-2 micron/C is pretty close to the average for the AOS, so seems believable. Would have been nice to see some follow-up, though. 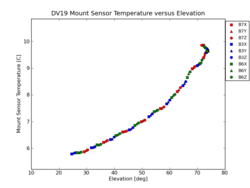 See Suzette's summary in any of the ALMA/VA weekly meeting reports for updates to these AIs. Additional notes below:

AI-8 (VA): Provide a surface map from an FEA model that shows the magnitude of surface deformations if the HVAC units is not running during the setting of the antenna surface

Vertex provided this calculation in the document Search for Astigmatism (Dec 2012). In that document they explore two scenarios which involve improper operation of the HVAC: Remember that we measure about +45 micron per C on the DV antennas, with a fair bit of consistency among antennas of this type. So, even though both of these FEM scenarios produce focus changes that agree in sign with that observed, they differ by at least a factor of about 2.5 in magnitude from that observed. NOTE: The FEA predictions of surface deformations from the two load cases investigated above predict that up/down bumps and left/right holes will be induced into the surface with an ambient temperature change of -20 K. This is in the same sense as the astigmatic structure both modeled and observed.