Measuring the Density and Temperature of Starburst Galaxies

The Physical Conditions Within Starburst Galaxies

Studies of the distribution of Carbon Monoxide (CO) emission in external galaxies (cf. Young & Scoville (1991)) have pointed to the presence of large quantities of molecular material in these systems. These studies have yielded a detailed picture of the molecular mass in many external galaxies. But, because emission from the abundant CO molecule is generally dominated by radiative transfer effects, such as high optical depth, it is not a reliable monitor of the physical conditions, such as spatial density and kinetic temperature, quantities necessary to assess the possibility of star formation. Emission from less-abundant, higher-dipole moment molecules are better-suited to the task of deriving the spatial density and kinetic temperature of the dense gas in our and external galaxies. For this reason, emission line studies from a variety of molecules have been made toward mainly nearby galaxies (see Mauersberger & Henkel (1989) (CS), Gao & Solomon (2004a) (HCN), Nguyen-Q-Rieu et al. (1992) (HCO+), Mauersberger et al. (1990) and Meier & Turner (2005) (HC3N), Mauersberger et al. (2003) (NH3), or Henkel, Baan, & Mauersberger (1991) for a review). The most extensive sets of measurements of molecular line emission in external galaxies has been done using the J=1-0 transitions of CO (Helfer et al. 2003) and HCN (Gao & Solomon 2004a). Since the J=1-0 transitions of CO and HCN are good tracers of the more generally distributed and the denser gas, respectively, but do not provide comprehensive information about the individual physical conditions of the dense, potentially star-forming gas, another molecule must be observed for this purpose.

Formaldehyde (H2CO) has proven to be a reliable density and kinetic temperature probe in Galactic molecular clouds. Existing measurements of the H2CO 1(10)-1(11) and 2(11)-2(12) emission in a wide variety of galaxies by Baan et al. (1986), Baan et al. (1990), Baan et al. (1993), and Araya et al. (2004) have mainly concentrated on measurements of the 1(10)-1(11) transition. One of our goals with the present study was to obtain a uniform set of measurements of both K-doublet transitions with which the physical conditions, specifically the spatial density, in the extragalactic context could be derived. Using the unique density selectivity of the K-doublet transitions of H2CO we have measured the spatial density in a sample of galaxies exhibiting starburst phenomena and/or high infrared luminosity. Results from the first phase of this work, which was a "pilot survey" of a sample of mainly nearby galaxies measured using the GBT (Mangum et al . (2008) has shown that H2CO is a reliable and accurate density probe for extragalactic environments where the kinetic temperature is known. See our recent poster describing this work presented at the Infrared Emission, ISM and Star Formation workshop held at MPIA in Heidelberg, Germany, February 22-24. 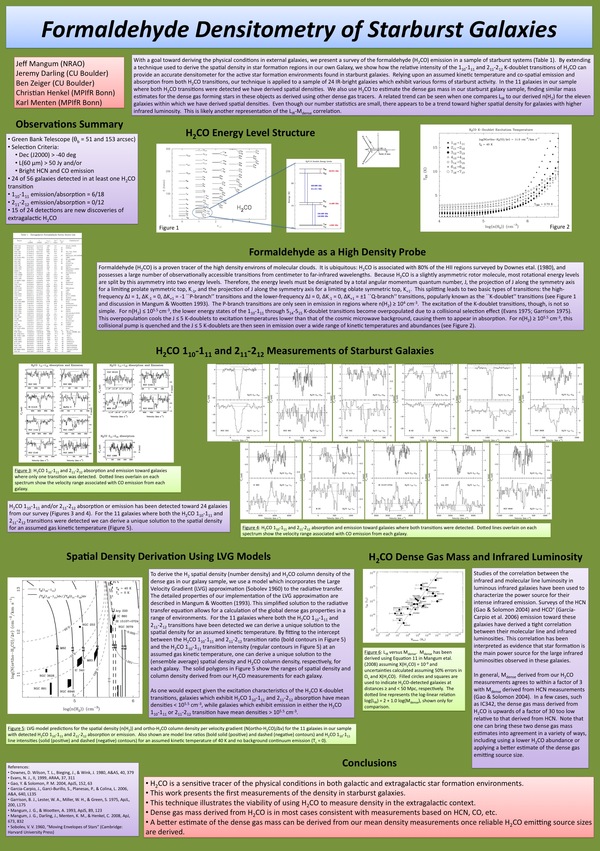 Formaldehyde Densitometry of Starburst Galaxies poster presentation given at the 'IR10' conference.
This then leads us to the second part of this project...

The derivation of n(H2) in our sample of starburst galaxies currently relies upon assumed kinetic temperatures. The inversion transitions of NH3 and the rotational transitions of H2CO possess very similar excitation conditions, thus likely trace similar dense gas environments. Using the unique sensitivities to kinetic temperature afforded by the excitation characteristics of several inversion transitions of NH3 , we can continue our characterization of the dense gas in galaxies exhibiting starbursts by measuring the kinetic temperature in a sample of galaxies selected for their high infrared luminosity. This extension of our successful galaxy survey will allow us to further study the range of mean physical conditions which give rise to star formation in some of the most starburst-active galaxies known.

Formaldehyde as a Spatial Density Probe

Formaldehyde is a proven tracer of the high density environs of molecular clouds. It is ubiquitous: H2CO is associated with 80% of the HII regions surveyed by Downes et al. (1980), and possesses a large number of observationally accessible transitions from centimeter to far-infrared wavelengths. Because H2 CO is a slightly asymmetric rotor molecule, most rotational energy levels are split by this asymmetry into two energy levels. Therefore, the energy levels must be designated by a total angular momentum quantum number, J, the projection of J along the symmetry axis for a limiting prolate symmetric top, K-1 , and the projection of J along the symmetry axis for a limiting oblate symmetric top, K+1 . This splitting leads to two basic types of transitions: the high-frequency ∆J = 1, ∆K−1 = 0, K+1 = −1 P-branch transitions and the lower-frequency ∆J = 0, ∆K−1 = 0, ∆K+1 = ±1 Q-branch transitions, popularly known as the "K-doublet transitions (see discussion in Mangum & Wootten (1993)). The P-branch transitions are only seen in emission in regions where n(H2 ) >= 10^4 cm−3 . The excitation of the K-doublet transitions, though, is not so simple. For n(H2 ) < 10^5.5 cm−3 , the lower energy states of the 1(10)−1(11) through 5(14)−5(15) K-doublet transitions become overpopulated due to a collisional selection effect (Evans et al. (1975); Garrison et al. (1975)). This overpopulation cools the J ≤ 5 K-doublets to excitation temperatures lower than that of the cosmic microwave background, causing them to appear in absorption. For n(H2 ) > 10^5.5 cm−3 , this collisional pump is quenched and the J ≤ 5 K-doublets are then seen in emission over a wide range of kinetic temperatures and abundances (see Figure 1 in Mangum etal (2008)).

Ammonia as a Kinetic Temperature Probe

Ammonia is a proven and unbiased tracer of the high density regions within molecular clouds in a variety of galactic and extragalactic environments (cf. Walmsley & Ungerechts (1983), Mauersberger et al . (2003)). Because NH3 is a symmetric top molecule (energy levels given by quantum numbers (J,K)), exchange of population between the K-ladders within a given symmetry state (ortho or para) occurs only via collisional processes. The relative intensity of these rotational energy levels then represents the urgently needed direct measure of the kinetic temperature (cf. Figure 1), breaking the Tk  n(H2 ) degeneracy. The inversion transitions of NH3 at 2327 GHz have been used to monitor the kinetic temperature in both cool (TK ≃ 20 K) and warm (TK ≃ 300 K) galactic and extragalactic star formation environments. For example, a study of the NH3 (1,1) through (9,9) transitions toward NGC 253, IC 342, and Maffei 2 by Mauersberger et al . (2003) revealed warm (TK = 100140 K) gas toward NGC 253, IC 342, and Maffei 2 and cooler gas (TK = 60 K) toward M82. In this study, the NH3 (2,2)/(1,1) line ratio monitors lower kinetic temperatures (<= 40 K), while the NH3 (4,4)/(2,2) ratio monitors the higher kinetic temperatures (<= 150 K) in our starburst galaxy sample.

Observations To Be Analyzed

The VLA was used to image the H2CO 1(10)-1(11) and 2(11)-2(12) emission in NGC253, M83, and IC342. This project represents a follow-up to our GBT survey of H2CO emission in these and other starburst galaxies, with a goal towards identifying the spatial structure of the dense gas in these starburst galaxies. These 1.2 arcsec spatial resolution measurements should allow for a very clear characterization of the dense gas structure in these classic starburst galaxies. Reduction and analysis of these measurements has been patiently waiting for a dedicated student to carry the project forward!

The Green Bank Telescope (GBT) has been used to make single-pointing measurements of the 1(10)-1(11) (4.8 GHz) and 2(11)-2(12) GHz) K-doublet transitions of H2CO toward a sample of 52 galaxies exhibiting various aspects of starburst activity. The first phase of this project was published in Mangum etal. (2008). A follow-up paper, which adds to the data presented in our 2008 paper, is currently being analyzed. Some of the measurements of the H2CO emission and absorption in the 1(10)-1(11) and 2(11)-2(12) transitions toward our starburst galaxy sample are shown in the following figures. 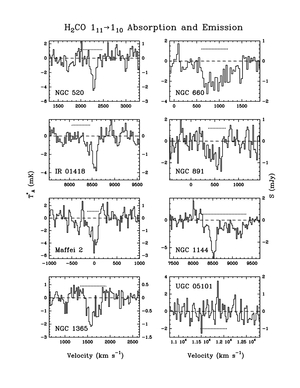 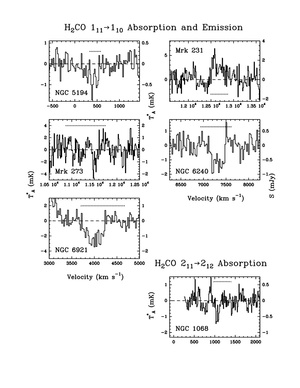