is some arbitrary offset to make sure all delays are positive,

is a per antenna constant representing the electronic delay,

is the geometric delay derived by making a call to CALC, and

The following description of CALC was derived from a description provided by John Benson:

The CALC program was written and is maintained by the VLBI group at GSFC. It is part of their off-line data reduction package for astrometric and geodetic VLBI observations. CALC is mainly paired up with a big least squares fit program (SOLVE) that solves for source positions, VLBI antenna positions, and other things. GSFC uses CALC to remodel their VLBI observations prior to running the SOLVE program. I think they run CALC-SOLVE iteratively to get the best solutions. In 1985 we in the VLBA correlator group decided that the correlator on-line model should be a high accuracy model that would be good enough to allow phase referencing in the VLBA directly. That is, no delay model corrections would have to be made in post-processing. We chose CALC as the model to use. We also considered the JPL MODEST program. In hindsight this was a good choice, as CALC is a long-lived standard amongst astrometric model programs. In 1985 we also recognized that besides a high accuracy on-line delay model, we needed accountability for that model. That is, the archived VLBA data needed tables that exactly described the model values that the correlator applied. If the user was going to correct his data in post-processing, the correction process needed to know what model values were used when by the correlator. For this reason the ASDM contains a set of tables that describe the delay model at various levels. They're based on the VLBA archive data model.

The CALC model in the VLBA correlator generates station delays with respect to the Earth's center, and CALC is run in a mode where a CALC baseline is stn A = earth center, stn B = antenna. GSFC added this mode for us. It basically turns off model components for stn A, like atmos, etc. In the VLBA correlator, the reference time (UTC) is the wave front arrival time at the earth center. That is, for a given antenna, the wave front delay from the antenna to the geocenter is the delay for that wave front. I like to think of a time tagged wave front as a pulse. The pulse hits the antenna and later hits the geocenter at time t. CALC calculates the delay. The correlator model generates antenna delays all at the same reference time, which means the delays are for the same wave front which is exactly what you want. For the VLBA correlator in the early years we actually ran the CALC program in the on-line computer. Later on we put CALC in an off-line rpc server and that's what we do today. And in fact I often bring up a CALC server on other machines for testing, etc. So a client process sends an rpc request to a CALC server, which then receives a response containing delays, and other things. The CALC server request is for one antenna at one reference time. And the request is assembled in a simple C struct. The CALC model itself contains individual model components where the GFSC philosophy was to calculate each model component to maximum accuracy. There is no error budget that governs the design of the model components. So you might say some items are 'over-modeled' since other items might not be as well determined and dominate the error level of the CALC delays. But CALC was part of a fitting solution, so I guess the intention was to solve for corrections to the poorly modeled components, like the atmosphere. The CALC atmospheric model was built by Art Neill years ago, and it's based on radiosonde balloon flight data mainly from airports. It's certainly not adequate for ALMA, and can be turned off in CALC. (More information on the atmospheric model below). The CALC subroutines are called from a wrapper that I wrote, calcmodl2.f. This includes calculations of delay corrections for curved wavefronts, and gravitational bending for objects within the solar system.

The current refraction correction in the VLA is basically the same algorithm that has been in use for years (written by Barry Clark). It uses local pressure, temp, and dew point. It is not included in CALC or its wrapper, and is in fact part of the online control system.

The following include file contains descriptions of the request and response values for CALC:

The delay experienced by an incoming signal due to its propagation through the Earth's atmosphere is given by:

is the path through and n is the refractive index of the atmosphere. Since

) instead of the index of refraction. Refractivity and refractive index are related as follows:

Furthermore, the atmospheric delay can be separated into contributions due to the dry and wet atmosphere:

is the contribution due to dry air while

is the contribution due to wet air. In general

) which relate delays at an arbitrary elevation angle

to that at the zenith:

Since the elevation angle

is the unrefracted source elevation, refraction effects are included in the mapping functions

. In the following I describe calculations of

The contribution to the atmospheric delay at the zenith (

, while induced dipole moments contribute as

is the pressure and

is the temperature of the species. A simple parameterization of the refractivity at the zenith is given by the Smith-Weintraub equation (Smith & Weintraub 1953):

are the partial pressures due to dry and wet air, T is the temperature of the atmosphere, and

are constants. The pressures and temperature are usually taken to be equivalent to the local ambient values at the antenna station under study. The dry and wet air refractivities are then given by:

The dry air contribution to this refractivity (

) is primarily due to oxygen and nitrogen, and is nearly in hydrostatic equilibrium. Therefore,

does not depend upon the detailed behaviour of dry air pressure and temperature along the path through the atmosphere, and can be derived based on local atmospheric temperature and pressure measurements. The wet air refractivity (

The simplest form for the mapping function (

), which relates the delay at an arbitrary elevation angle

to that at the zenith, is given by the plane-parallel approximation for the Earth's atmosphere:

This simple form is in fact inadequate, which led Marini (1972) to consider corrections to this simple functional form which accounted for the Earth's curvature. Assuming an exponential atmospheric profile where the atmospheric refractivity varies exponentially with height above the antenna, Marini (1972) developed a continued fraction form for the mapping function:

at the zenith replaces the even numbered

Chao (1974) introduced this modification by truncating the Marini (1972) form to include only two terms. A more generalized continued-fractional form for the mapping function was developed by Yan and Ping (1995):

(i.e. start the integration from the ground). The constants

, etc. in the continued fraction forms above are generally derived from analytic fits to ray-tracing results either for standard atmospheres or for observed atmospheric profiles based on radiosonde measurements. The mapping functions derived in Niell (1996) and Davis (1985) are derived in this way. A physically more correct mapping function has been derived by Lanyi (1984). Unlike previous mapping functions, Lanyi does not fully separate the dry and wet contributions to the delay, which is a more physically correct approximation. It is based on an ideal model atmosphere whose temperature is constant from the surface to the inversion layer

, then decreases linearly with height at rate

(the lapse rate) from

to the tropopause height

, then is assumed to be constant above

. This mapping function is designed then to be a semi-analytic approximation to the atmospheric delay integral that retains an explicit temperature profile that can be determined using meteorological measurements. The mapping function is expanded as a second-order polynomial in

, plus the largest third-order term). It is nonlinear in

, thus including terms which arise from the bending of the signal path through the atmosphere. The functional form for the atmospheric delay in this Lanyi (1984) model is given by:

With standard values of

(appropriate for mid-latitudes), and

. The dry, wet, and bending contributions are expressed in terms of moments of the refractivity. The bending terms are evaluated for the ideal model atmosphere and thus give the dependence of the delay on the four parameters

. Therefore, the Lanyi (1984) model relies upon accurate surface meteorological measurements at the time of the observations to which the delay model is applied.

In the calculation of the zenith atmospheric delay at an antenna it is assumed that the atmospheric properties (P, T, RH) are the values measured at the focal plane of the antenna. For example, in VLBI each station has a set of associated weather measurements which are used to calculate

is the atmospheric refractivity,

is the atmospheric zenith delay calculated using the VLA weather station (which is located near the center of the array),

where I have assumed P = 1053 mb. The dry term zenith atmospheric delay changes approximately like 2.3 mm/mb of pressure change. A pressure change of 0.068 mb corresponds to approximately 156 micron of path difference. This is consistent with alternate back-of-the-envelope calculations of this quantity.

NOTE: The following is just an aside. Since CALC or any other analysis of the atmospheric delay at an antenna calculates the total integrated delay along the path of observation, the differential delay between two antennas is accounted for in any differencing calculations done during baseline determination. The differential delay induced in an interferometer by a horizontally stratified troposphere results from the difference in zenith angle of the source at the antennas. Thompson, Moran, and Swensen (2001), pp. 516-518 discuss the atmospheric delay induced along an interferometer baseline. The excess path length is given by:

is the refractivity at the Earth's surface,

is the height above the Earth's surface,

is the atmospheric scale height,

is the length coordinate along the direction to the source, and E is the antenna elevation while observing the source. Note that refraction is neglected. One can relate

as follows (see Figure 13.4 in TMS, page 517; reproduced below) using the cosine rule on the triangle formed by

and using elevation rather than zenith angle yields:

For the triangle which is formed by sides

, and the side which is equal to

(the height of the troposphere),

(Thanks to Dick Thompson for filling-in some of the details of this calculation). We can now write the expression for

, the second term in the equation above can be expanded with a Taylor series so that:

Taking the derivative of

is in km. Note that once must calculate

using a suitable atmospheric model which uses measurements of the local atmospheric pressure, temperature and relative humidity to derive the resultant differential residual delay. I have produced a plot of this relation as a function of 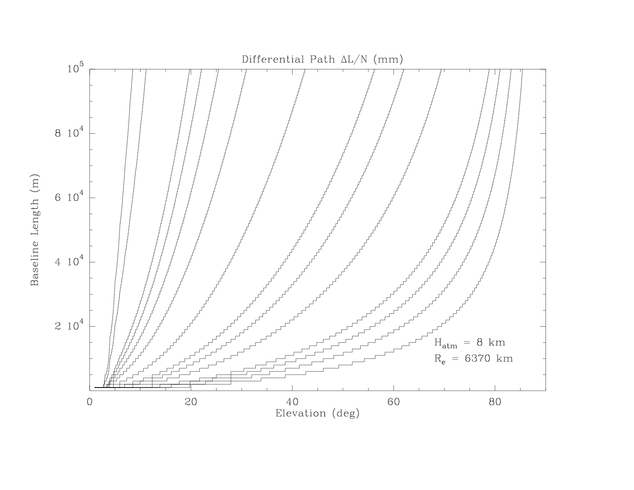 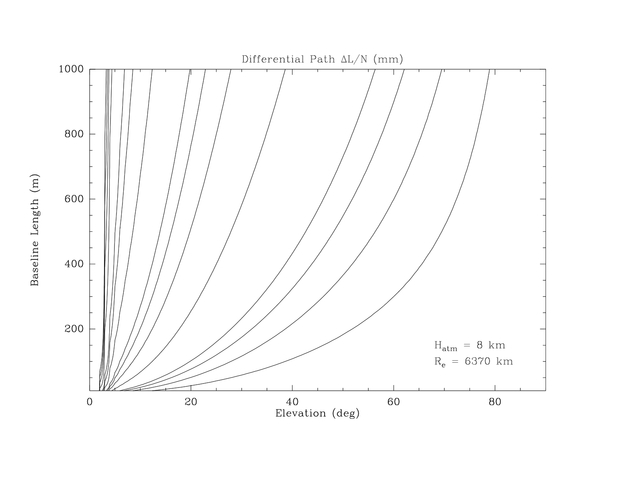 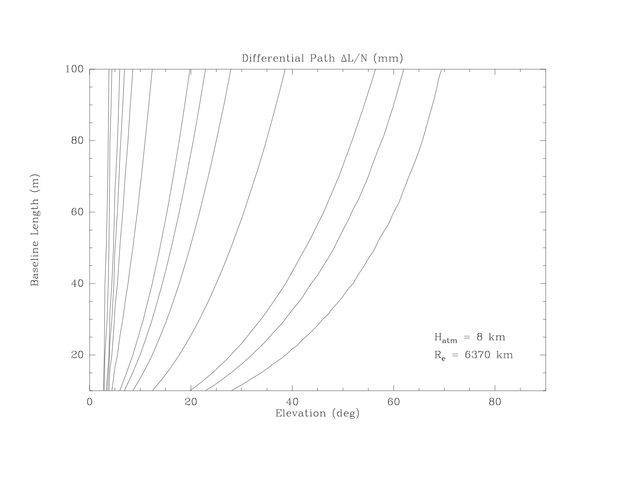