Start with the introduction to this project. Contains a summary of the science behind this project and what the potential analysis steps will be to turn this research project into a published article. This document also includes a reading list with articles that in many cases are meant to provide an introduction to the broader topic of the study of star formation in galaxies. Sample image (below) is HCN 1-0 integrated intensity. 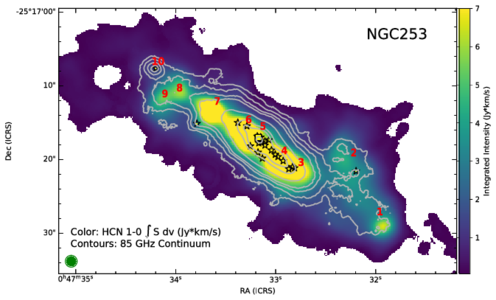 Check out the Overleaf document containing analysis items done so-far (which will serve as a starting point for the published article for this project).

This project will combine a number of VLA and VLBI imaging measurements of the continuum emission from IC860 with a goal toward deriving a definitive model of the radio/millimeter/submillimeter continuum emission in this enigmatic object. Combines data from the following observing projects: 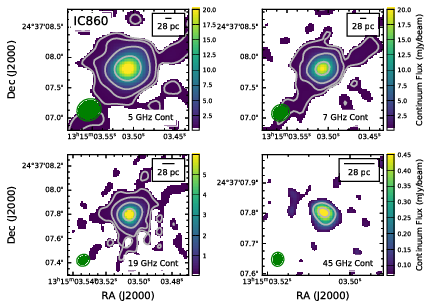 ALCHEMI Science Project 9.0: Comparison of Physical and Chemical Conditions in the Central Molecular Zones in the Milky Way and NGC253

ALCHEMI science project PIs: Kunihiko Tanaka and Jeff Mangum Note: This project is the least well-developed of the three projects currently listed, so may not be appropriate as a Master's Thesis project. Should certainly be considered for a more long-term project such as for one's PhD. Project Description: The curiously low star formation efficiency of the Milky Ways galactic central region is a popular topic in recent star formation study; although the MWs GC region shows chemical and physical characteristics similar to actively star-forming GMCs (high temperature, high density, and rich abundance of COMs), its SFE is 1 or 2 orders below the K-S relation. The origin of this low SFE can be explored through comparison of the physical and chemical properties with GC of NGC253, which appears similar to MWs GC in molecular maps (Sakamoto+11) but is a starburst. The rich molecular line data provided by ALCHEMI enables us to perform spatially-resolved measurement of gas kinetic temperature, gas volume density, and fractional abundance of molecules. I plan to use a hierarchical bayesian parameter inference method I developed for analysis of MW's GC data (Tanaka etal 2018, ApJS, 236, 40). This method is able to suppress unphysical solutions that are often problematic in flat-prior bayesian or maximum likelihood analysis, such as anti-correlation between column density and volume density. (Similar method to that used for dust SED fit; Kelly etal 2012, ApJ 752, 55) Through this analysis, we will be able to diagnose the conditions of the GMCs in NGC253 and compare them with the result for MWs GC; volume density and gas temperature are directly measured, and information on strength of turbulence is obtained from spatial variation of temperature and shock tracer abundances, and velocity widths. By using these value, we will search for the parameter sets that best distinguish NGC253 and MW's GCs. Traditional analyses using LVG and 3D microturbulent modeling of a number of molecules, including the 23 P-branch (delta(J)=1) transitions of H2CO measured by ALCHEMI, will also be used to constrain a multi-scale model of the volume density and kinetic temperature in NGC253 on scales as small as 20 pc. This more traditional analysis will be compared to the hierarchical bayesian parameter inference method described above.

This project is similar to the HCN/HNC ratio study above, but differs in that it focuses on an assessment of a different kind of dense gas heating (cosmic ray) in the NGC253 starburst. Derives from a compelling analysis from Mangum etal. (2019): 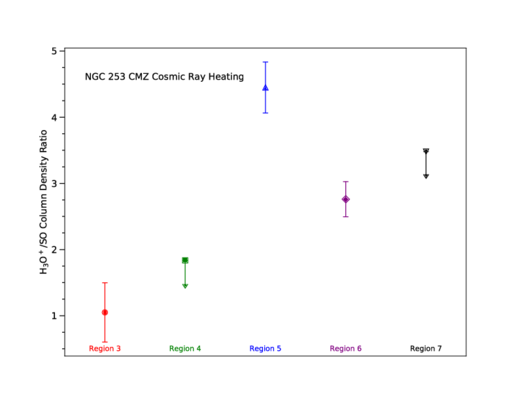