The NRAO Guppi Pulsar data Acquisition system uses two U.C. Berkeley IBOBs to sample two input polarizations and transfers these data streams to a BEE2 on two pairs of XAUI connectors. The Guppi IBOB design uses relatively few resources on the Xilinx chip, so room is available for additional capabilities. This page documents the Version 3.0 of the Guppi Event Capture design, and includes a description of the Matlab/Simulink design, the interface between the IBOBs and the linux computers which request the captured event data. We also provide a pair of C programs, eventFft and event3d, which display the captured data.

The earlier IBOB design includes a "double speed", interleaved, sampler, test signal generator and clock counters for aligning the two XAUI data streams upon arrival at the BEE2. The event capture design adds a two additional data paths, one for event detection and the second as a delay, to allow centering the event in the capture buffer.

The eventCapture design must be configured for data acquistion, including setting the significance of the event to detect and the duration of the captured data. These configuration parameters are set using a python program that transfers the parameter values to the IBOB via the Light Weight Internet Protocol (LWIP).

The C programs to collect the data and analyze the events are provided in a TAR file with make file. The plotting depends on having ghostview installed on the linux box used for analysis.

The time series of samples and the spectrum of the events can be analyzed with eventFft and event3d. The figure below shows the time series of capture of the 1 pulse per second (1 PPS) input to the IBOB, during testing. 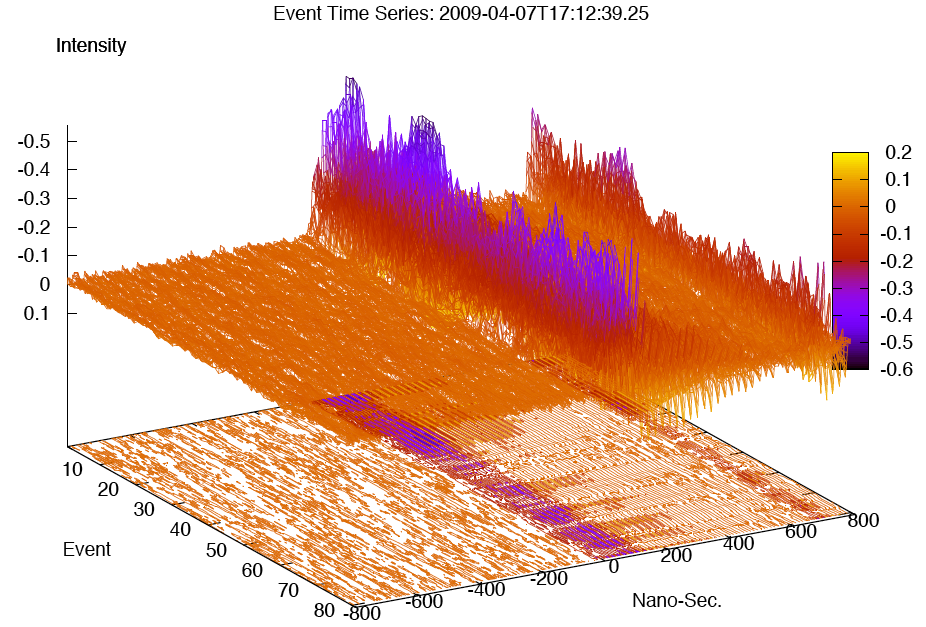