GUPPI is the Green Bank Ultimate Pulsar Processing Instrument, the backend system used for nearly all pulsar observing at the GBT.This wiki page is mainly intended for GB support staff to learn about how GUPPI works and some basic troubleshooting tips.More info about GUPPI can be found on these wiki pages: Some background info about pulsar observing in general can be found at: If this page does not contain information that you would like to see, please let us (Paul Demorest or Scott Ransom) know!

Basic info about the IF path to GUPPI:

GUPPI has two main modes of operation, incoherent filterbank mode, and coherent dedispersion.Each has a large amount of flexibility in terms of number of channels, etc.

Sometimes this also called search mode or filterbank mode.This mode is just like a normal spectrometer except the integration times are very short (typically tens of us).In this mode, the spectra are accumulated in the FPGA hardware, then output over the network and recorded to disk on beef. The available parameters are:

For observing known pulsars, a dispersion measure-specific filter can be applied to completely remove dispersion smearing.This is often done for MSP timing.In this mode, voltage data are output from the FPGA hardware to the gpu cluster computers.The GPUs apply the dedispersion filter and either fold or integrate in real time.

While there are a potentially large number of combinations of BW, # channels, etc available, a few setups get used much more than others: There are also a set of standard frequencies and bandwidths for the commonly used pulsar receivers: 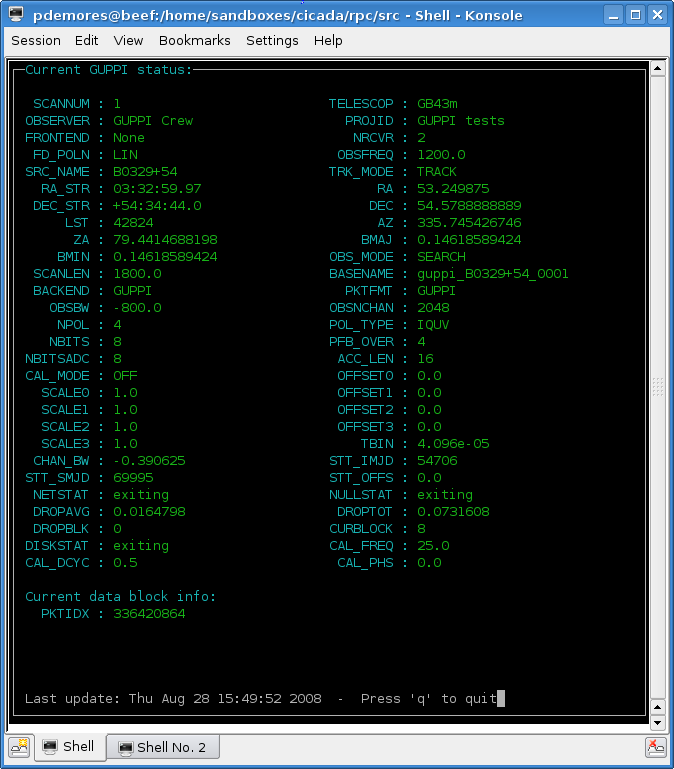 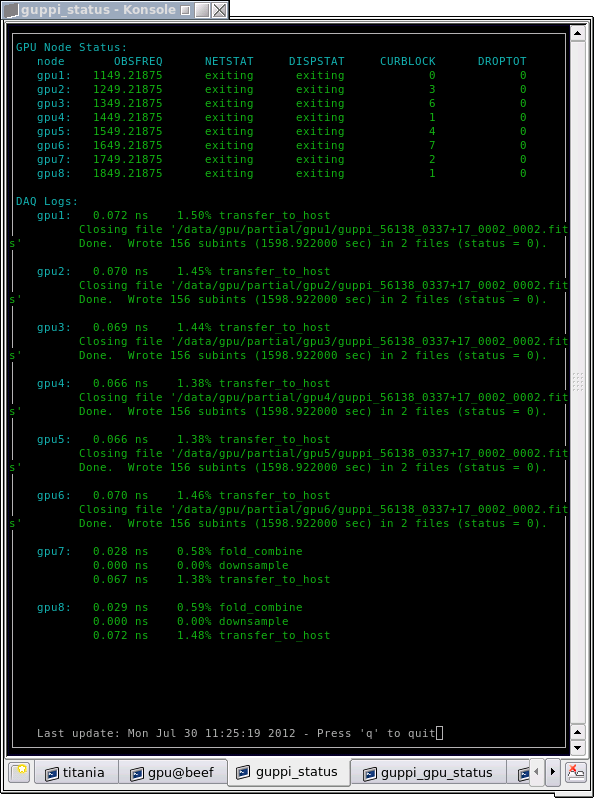 There will also be text output listing how far away from the target values the levels are: The L-band bandpass should look something like this: 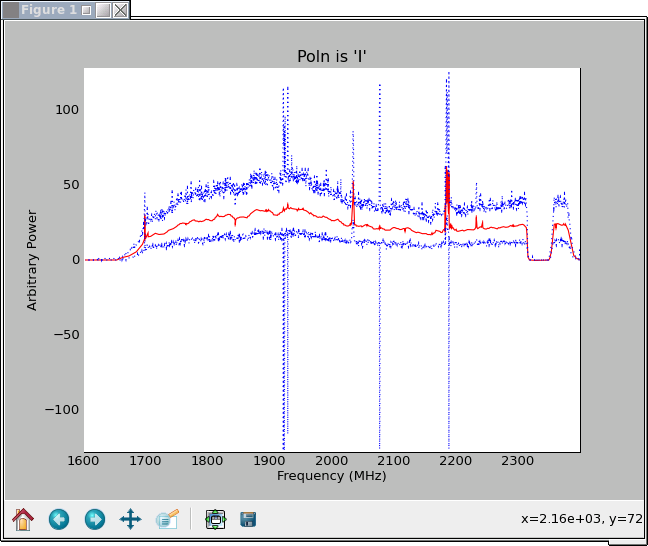 If GUPPI appears not to be working correctly when a scheduling block is run, there are several things to check, depending on what exactly the issue is.

If not, there could be a problem with the GBT Status database. Check the GBT Status tab in Astrid and see if things are correct and updating there. If they are not, ask the operator to re-start GBT status. If they are updating there, but not in the guppi_status window, then the guppi_status daemon on beef needs to be restarted. This can only be done by root on beef via the supervisorctl command. Call Paul or Scott.

The bandpass in guppi_monitor looks terrible and not like a bandpass

More than likely, "guppi.scale" in your configuration file is set incorrectly. Correct values are in the range 0.1-1.0, usually, depending on the BW and integration time you are using. If the values in guppi_monitor seem to be wrapping crazily, try decreasing "guppi.scale" by a factor of 3-10. If it is flatlined, try increasing it by a similar amount. Remember that you need to re-config and then re-start a scan for this to change.

GUPPI is dropping a lot of packets in an incoherent mode

If guppi_status or the guppi log files show that a significant fraction of the data are being consistently dropped, there can be several issues.

If guppi_status has information in it which is incorrect. Or if it (and also guppi_gpu_status for a coherent modes) has basically correct looking information but a scan won't start or record data, what has probably happened is that the GUPPI manager somehow got out of sync with the GUPPI hardware. This can often happen after software work on the GBT system. The solution is to ask the operator to open the GUPPI Manager via the Utilities/Device Explorer and do a "Conform Parameters" (via the Manager menu optin) and a "Prepare" (button at the bottom of the screen). If you are in the gateway, you can actually perform this yourself as an observer. Once the prepare has finished and the status in the Manager is "Ready", try re-configuring the system via Astrid and taking a scan again. This simple procedure fixes many of the issues we see with GUPPI. If the GUPPI Manager shows it self as being "NotConnected" or in some kind of error state, there are a couple things that can be tried with the manager.

In a coherent observation mode, one or more of the GPU nodes is not working

The first thing you should do is decide if you want to abort your observation or not in order to fix the problem (which may or may not be fixable). If you decide to do it, here are a couple steps to take:

Follow the Conform Parameters instructions given in the "GUPPI will not take data at all ..." section above. If this succeeds with no errors reported by the manager, GUPPI is working correctly. Running a test scan is not usually necessary. Conform parameters is a safe way to put GUPPI back into a known-good state, and should be run after any maintenance/testing activity that may have affected the state of GUPPI or the M&C system.

How to do a complete restart of all GUPPI software

This is how to completely reset everything, if necessary

How to change the list of GPU nodes for coherent GUPPI

The GUPPI GPU compute cluster has 9 nodes, but only uses 8 at a time for observation, so there is one spare. If a node dies, it can be replaced with the spare using the following procedure: -- PaulDemorest and ScottRansom - 2012-07-30