In analyzing RFI scans taken with VEGAS Ron Maddalena noticed 'rails' of spikes (hereafter spurs to differentiate between the center channel spike - likely a special case of the spurs) sticking out in the high pass filtered data. These spurs occupy single channels across the bandpass, and exist at generally RFI free frequencies (including Q-band data). The location of the spurs has been found to be stable, though the strength of their signal is not necessarily stable (such that they are not necessarily removed using standard calibration routines). The CASPER group was able to determine that the spurs occurred at regular intervals, such that in baseband the spurs could be found at:

is the location of the spur in frequency space, and

runs from 0 to 32 since the output spectra is Nyquist limited to half the sample frequency. While I have not been able to find literature deriving the

dependence, John Ford found papers showing similar features in interleaved ADCs (IEEE: Vogel 2005, Kurosaawa et al 2001, Petraglia 1991). These papers suggested that these spurs could be attributed to mismatched Offset Gain and Phase (OGP) settings between the ADCs. Significant testing has shown that altering the OGP calibration does impact the spurs, but even with suitable calibration, the spurs remain. Subsequent testing of the OGP calibration has shown that mismatched OGPs can and will exacerbate just about any issue found. We have also found that the impact of the spurs is reduced when using higher input levels into the ADCs, though at normal input levels the spurs can still be faintly detected. This has led us to believe that the spurs (to some extent) are not readily removed and thus they should be flagged. As we will show here, the

flags most of the spurs, but there are still significant spurs which are not located with this equation.

The data presented are all from TGBT14A _912_107, scans 193-198 . The astrid scripts used were: All scans are set to use Q-band, though this is irrelevant since during activation, the receiver was swapped for the noise source, assuring very low power, accentuating the spurs. Analysis was performed using the python script /home/scratch/akobelsk/spurs/detect_spurs.py , which utilizes the raw VEGAS data (as opposed to the SDFITS data generally used by GBTIDL). To view the spurs, the raw data was high pass filtered using the numpy command: This data was taken before the sample frequency was stored in the VEGAS header (which is now stored in container 0 as 'adcsampf'), so the value of 'valonf' (which is half the sample frequency) from the table fftrates.xls was used to compare the predicted spur locations to the observed locations.

Using the equation for

above, a spur can be noted at every predicted location. To locate any spurs not detected by this algorithm, we have replaced the data at these frequencies with the average value of their nearest neighbors (exactly as SDFITS does for the center channel spike - which occurs at

). We can then high pass filter this interpolated data set and locate the remaining spurs. In the plots to follow (you can see them all in one pdf here), the original data (only the center channel spike is replaced) is shown with blue lines, the black lines represent the data with the

spurs interpolated over. The red dashed lines are the spurs 'detected' by looking for features in the high pass filtered larger than 5 standard deviations (and within the analog filter pass band - 150 to 950 or 1250 MHz depending on mode). As you can see in the data, a few spurs remain even after removing the main spurs (though these are often significantly smaller). The plots below show the remaining spurs in a few different modes, though you are encouraged to look at the whole pdf to verify that the trends in the remaining spurs aren't as simple to follow as one might hope. In the below Mode 2 data you can see a few spurs remain, and that they are fairly notable in size: 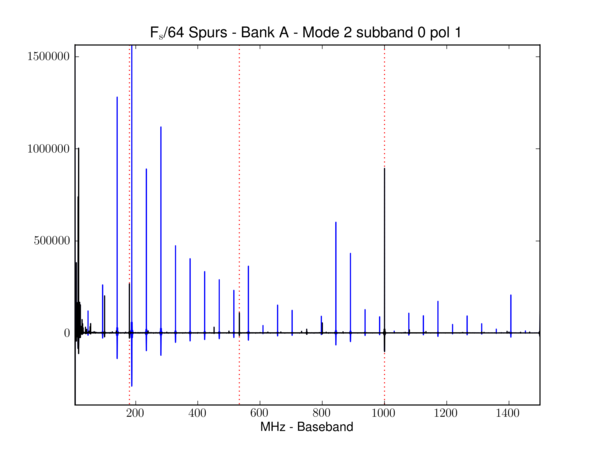 In this Mode 2 data from the other polarization you can see even more spurs remain, though less notable in size: 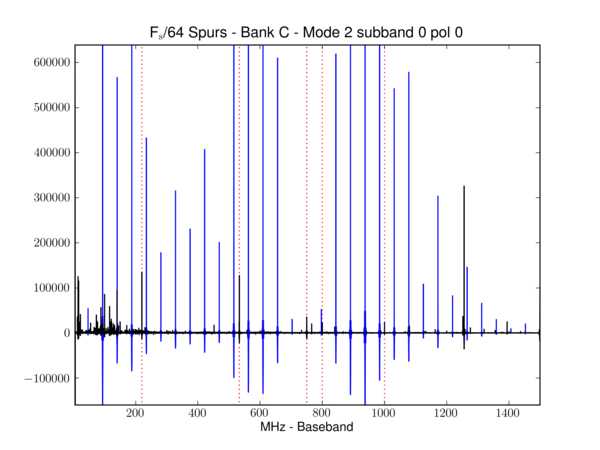 Here you can see how they look in Mode 5: 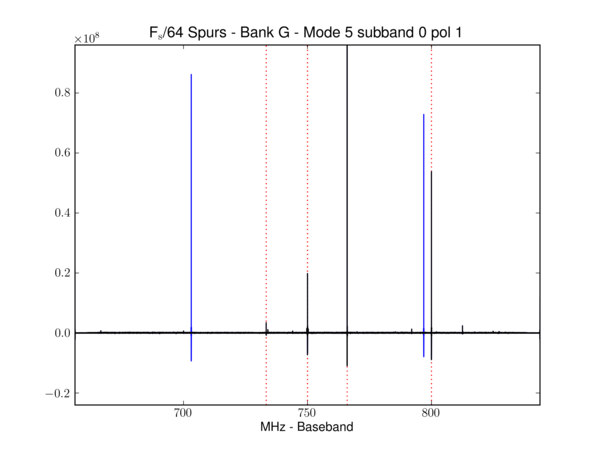 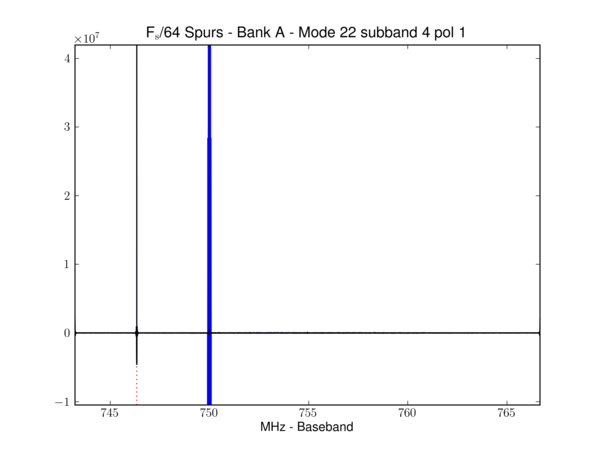