Email sent out to gbsapp about these data:

Good day all, The short story is this : I was wrong this morning. it seems unlikely that the bump is visible in the snap blocks. It also appears that the bump shows up around other strong single channel sources. I have a working hypothesis that it could be due to a windowing function in the digital processing, the most likely culprit being the FFT. More data is needed, but not necessarily the data we have been looking at. I gathered 1 hour of snap blocks so we could definitively tell if the VEGAS bump was in the ADC data. My conclusion is that they are NOT in the ADC data, as I had thought possible earlier today (noisy data). The attached images adcLongSnap.png and adcLongSnapCentered.png show the raw ADC data averaged over 900 ADC snapblocks (each on 16K). The center spike shows up at 0.5 (the x-axis units have been scaled arbitrarily between 0 and 1). 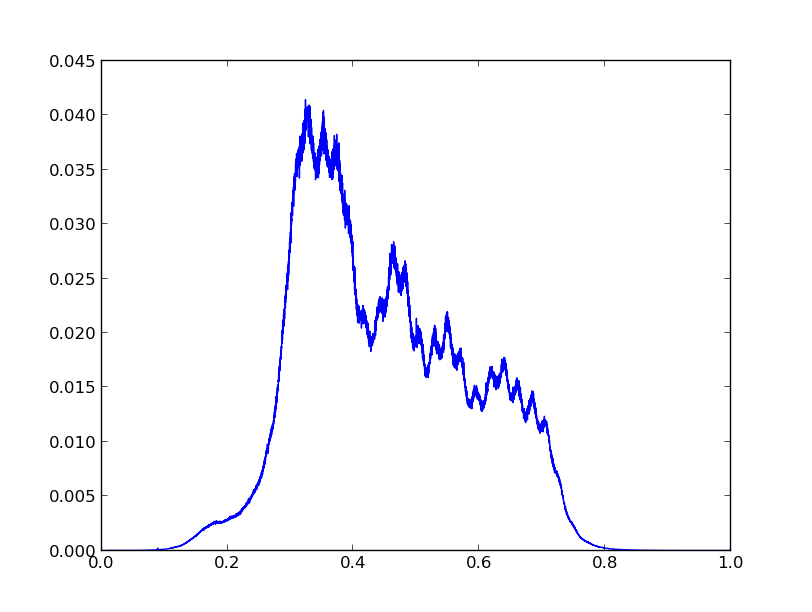 When zooming in around the spike, we can see that there is no notable increase in power (read: no bump) centered on the spike: 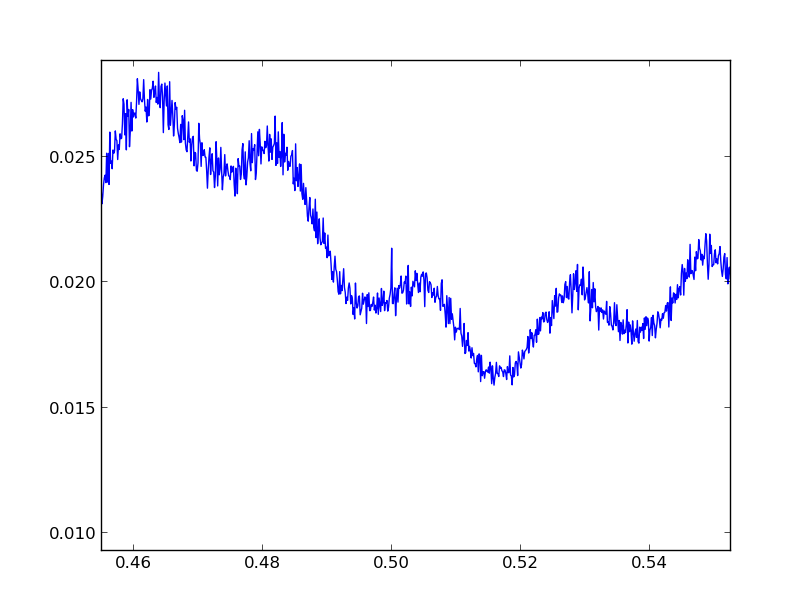 When looking at this data using the VEGAS output, though, we can clearly see the central spike and the bump (x-axis is now in MHz): 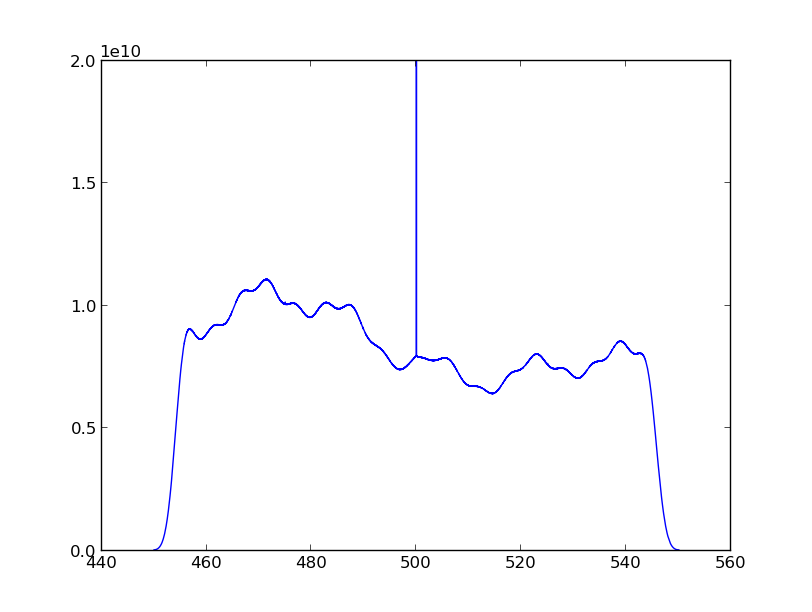 Zooming in, the bump becomes even more apparent: 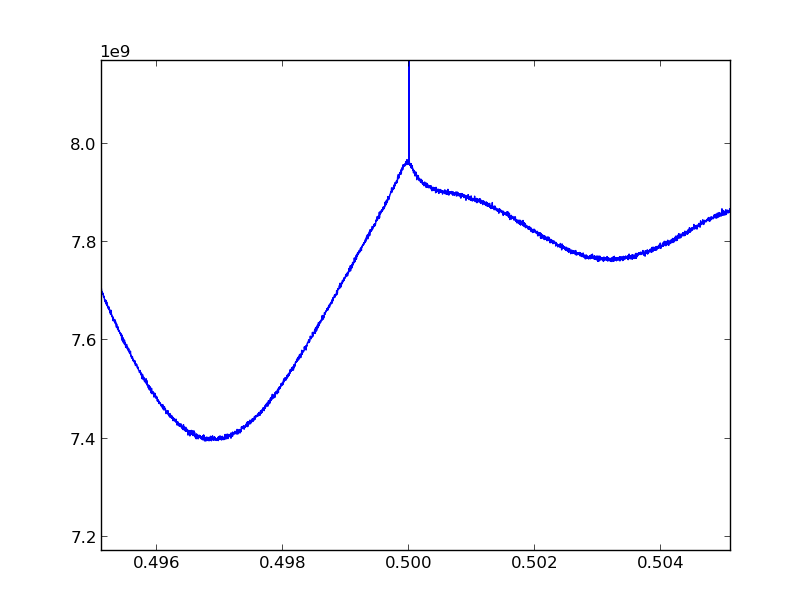 At this point, I think it is not unreasonable to say that we do not see the bump using the ADC snap blocks. It is possible that we just do not get sufficient resolution with 16K snap blocks, though I am not convinced. I also looked at how the bump appears in overlapping subbands (such that the Fs/4 spike will appear in multiple windows, but not centered in the other windows). In these cases, the bump shows up exactly as expected, where expected. Without calibration, the bump appears fainter when it is not centered in the bandpass, which is likely due to the bandpass shape. centerspike_2window_comparison.png shows in red the bandpass subtracted bump for the window with Fs/4 centered, and in black is the window where Fs/4 is not centered (note that for the bandpass fit for the black curve, the center region was not fit, allowing a bump to show up if it existed). 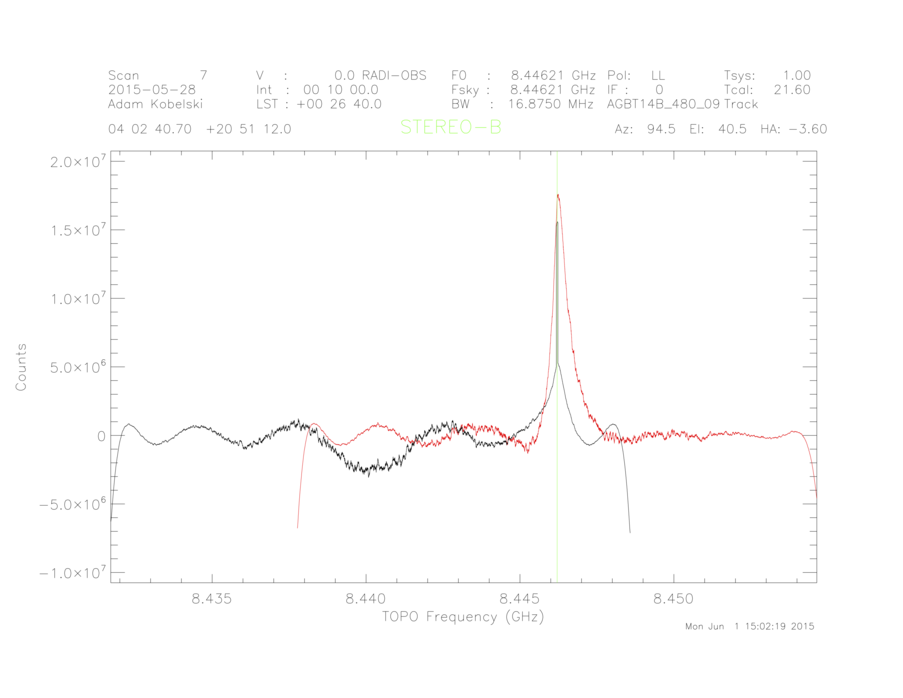 I also looked at a data set which had a bright source, very reminiscent of a single channel chirp : a spacecraft carrier signal. In particular, I looked at data from the STEREO-A spacecraft. At this time, from Earth, the spacecraft appears to be only ~1.7 R_sun away the sun, so the signal is attenuated (Tsys in the hundreds of K). What was interesting about this data was that the center channel bump is not visible. stereoAnotcentered.png shows the spectra from the STEREO-A observation, where I have used an polynomial fit to the baseline (ignoring the regions around the center spike and the spacecraft signal). The green line in the plot indicates where the central spike would exist. 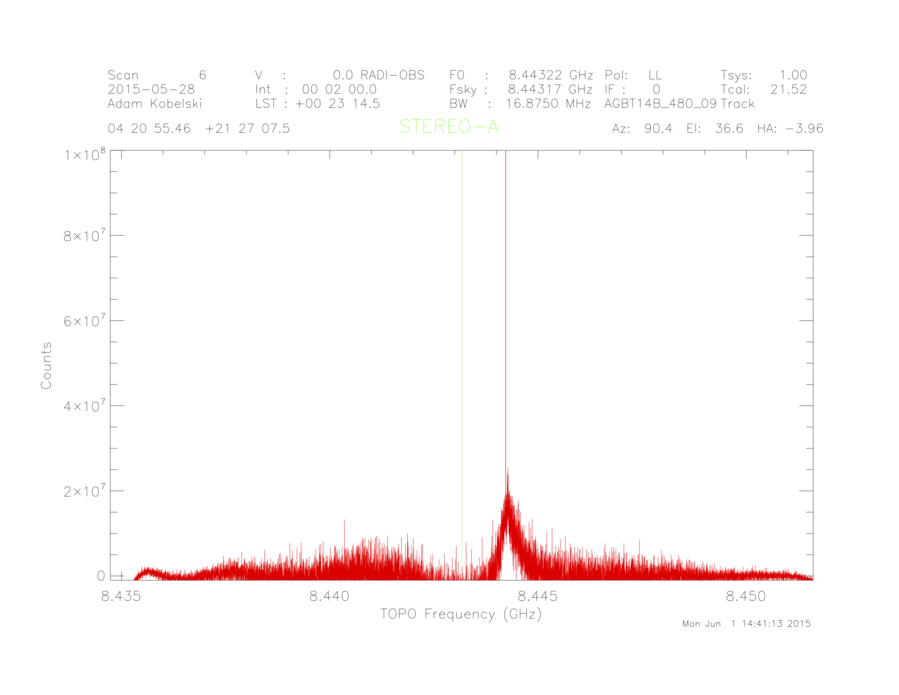 While this could be an artifact of the spacecraft signal, it definitely does not look like the standard lobes you generally see in such data. It looks very much like bump around Fs/4. This has me thinking that what we are seeing is potentially a windowing-effect from within the data pipeline (likely around the FFT). In this model, the windowing is faint, and so is only readily detected around very bright point-source signals being processed, such as the Fs/4 spike or spacecraft signals. Is there a possibility for this to be the case? If this is a possibility, I think it would be worthwhile to send a strong chirp into the system and look for this effect. We would also need to re-examine the previous transitive finding that the bump increases in size with input power while the spike decreases in size with input power. To recap, it seems unlikely that the bump is visible in the snap blocks. It also appears that the bump shows up around other strong single channel sources. Could it be a windowing function of the FFT? Adam -- AdamKobelski - 2015-06-01