Additional ALMA Science Verification Available The second installment of ALMA Science Verification data is now available from the ALMA Science Portal via the "ALMA Data" link, or directly at https://almascience.nrao.edu/alma-data/science-verification. These datasets consist of observations of the merging galaxy system known as the Antennae (NGC4038/9), and two observations of the proto-planetary disk TW Hya (supplementing previously released data on this object). The Antennae dataset is the first mosaic data to be released by ALMA, and has an accompanying "CASAguide" at http://casaguides.nrao.eduindex.php?title=AntennaeBand7 which explains all of the calibration and imaging steps (CASA, the Common Astronomy Software Applications package, is the package used to calibrate and image ALMA data and is available at http://casa.nrao.edu/). The data products released here contain raw, uncalibrated data together with the necessary calibration tables to allow users to try their hands at a complete data reduction. Calibrated versions of the data are also provided, as are reference images in FITS format. These SV datasets demonstrate the early capabilities of ALMA, before 16 antennas were available and while many of the subsystems were still being tested, so they should not be construed as representing the quality of the data that can be expected during Early Science. ALMA is still in the construction phase, and while the currently available datasets are impressive, the quality of data being collected using ALMA is continuously improving. These products are the result of the dedicated work of a large number of staff at the Joint ALMA Observatory in Chile and the ALMA Regional Centers (including the NAASC), who have participated in the commissioning activities, observations and data reduction that made this release possible. For figures, I suggesting using the one at: Error: not an image at 'http://casaguides.nrao.edu/index.php' Caption: "The CO(3-2) total intensity map (moment 0) comparison with SMA data. Colour image is ALMA data, combining southern and northern mosaics. Contours show SMA data (Ueda, Iono, Petitpas et al., submitted to ApJ)." Next to the one at: Error: not an image at 'http://casaguides.nrao.edu/index.php' rotated appropriately. Caption: "The Antennae galaxies (NGC4038-39) comprise the closest ongoing merger of two spiral galaxies. The background image was taken by the Hubble telescope and reveals the dust lanes and regions where super star clusters are formed. The contours show the molecular gas as traced by CO(1-0). Credit: NASA, ESA, and the Hubble Heritage Team STScI/AURA - ESA/Hubble Collaboration. Acknowledgement: B. Whitmore ( Space Telescope Science Institute) and James Long (ESA/Hubble)."

ALMA Software Development Workshop website: https://science.nrao.edu/facilities/alma/naasc-workshops/almasoft2011 Abstract: NRAO will hold a workshop on 12-14th October to discuss software development plans for ALMA and closely related telescopes. The aim of the workshop is to come up with a set of ideas for software applications that will enhance the science output from ALMA, and to stimulate the formation of consortia willing to submit these ideas to the ALMA Development Program for funding (including seed funding via NRAO and full funding via the ALMA board) and/or the NSF directly. The workshop will concentrate on science data analysis of the large datasets that ALMA will produce. Topics will include line forest analysis, feature finding in large datacubes, matching data to simulations, visualization and compressive sensing. To propose a presentation during the workshop, please contact Mark Lacy at mlacy 'at' nrao.edu. [NOTE: Mark has requested that the email address be given as written to cut down on spam...} Due to the high demand for hotel accommodations in October, the deadline for guaranteed rooms (and the NRAO rate) is September 21st. If you plan to attend the workshop, please make your reservations early at: https://science.nrao.edu/facilities/alma/naasc-workshops/almasoft2011/hotel. The link is also available from the Workshop Registration website at October 12-14, 2011 https://science.nrao.edu/facilities/alma/naasc-workshops/almasoft2011/index 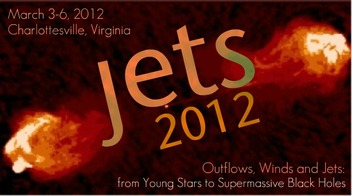 The NRAO North American ALMA Science Center (NAASC) will host its 6th annual science workshop -- "Outflows, Winds and Jets: From Young Stars to Supermassive Black Holes" -- in Charlottesville, Virginia, 3-6 March 2012. The venue is at the Omni hotel, located conveniently near downtown Charlottesville. Pre-registration is now open at the conference web site: https://science.nrao.edu/facilities/alma/naasc-workshops/jets2012. Pre-registration is not required, but will ensure that you receive timely information about the conference program and logistics. Registration will open on November 1st, 2011. 2012 will be a special year for radio wavelength science. In addition to the much anticipated operation of ALMA Early Science, other upgraded NRAO facilities -- EVLA, GBT and VLBA -- are joining forces to offer the astronomy community unprecedented access to superb imaging capabilities, the highest angular resolution and sensitivity, broad spectral coverage, and the highest precision. These telescopes together will transform the science of jets and outflows from young stars to supermassive black holes. This workshop is an exciting opportunity to bring together active researchers interested in outflow-bearing systems of different mass and size scales for a refreshing view of these spectacular phenomena. Focus areas include: The approach adopted by this workshop is interdisciplinary. Science arising across the mass and size scales will be naturally blended in. We hope to promote interactions among the various communities from young stars to active galactic nuclei, and to facilitate mutual exchanges and joint efforts at this special time.

August opened with sixteen ALMA antennas in place on the 16500 ft elevation Array Operations Site. Weather has been generally excellent, as expected during the altiplanic winter, during which temperatures never exceed freezing. The commissioning and science verification team focused attention on several areas, including a polarization campaign and further science verification projects. Among the ALMA antenna designs, there are four variants from three contractors, all meeting ALMA specifications. With the arrival of the first of the twelve 7m antennas, provided by the East Asian partner, all of the major antenna designs are now present in the array and undergoing commissioning. A total of twenty antennas have been accepted and integrated; not all of these are present at the AOS at any given time owing to the schedule for upgrading antennas and their electronics. * ALMA includes an array within the arrays--the Atacama Compact Array consists of a dozen 7m antennas which will gather data on shorter baselines than is possible with the larger 12m antennas. The first of the 7m antennas comprising the ACA arrived at the AOS during August. © ALMA (ESO/NAOJ/NRAO): 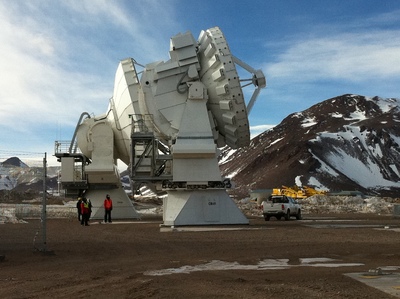 Up until now, servicing of receiver electronics has generally meant that an antenna, complete with its front end, has had to be transported from AOS to the Operations Support Facility (OSF) at a lower altitude. With the recent arrival of the Front End Servicing Vehicle, which is a North American deliverable that was fitted out in Taiwan for service, ALMA has the ability to change out receiver dewars directly at the antenna. New components continue to arrive for integration at the OSF. The 21st North American antenna should arrive in port by Labor Day. Thirteen East Asian antennas have arrived at the OSF. There are elements of ten European antennas at the OSF. Thus, two thirds of the antennas will be at the ALMA site in Chile, either in the contractors’ assembly camps, at the AOS or at the OSF at publication of this article. During the month, the North American Front End Integration Center at NRAO delivered its 9th assembled Front End to Chile. ALMA has received 24 Front End assemblies, with half a dozen more expected to arrive at the OSF in September. During August the process of reviewing ALMA proposals was carried out as reported in last months eNews. NAASC personnel were involved with the process at the Santiago Central Office: as Technical Assessors reviewing proposals and as Technical Secretaries for the science panel meetings. The Joint ALMA Observatory (JAO) in concert with the three ALMA Executives (NRAO, ESO and NAOJ) is currently finalizing the science-ranked list of projects to be scheduled during "Cycle 0", the inaugural science observing period on ALMA. Shortly thereafter the NAASC will assign staff to assist successful North American proposers with reviewing their projects "phase II" materials for data acquisition, and ultimately with the observing products and data reduction. The PIs will be contacted by their 'friends' as this process continues. -- LyndeleVonSchill - 2011-08-15