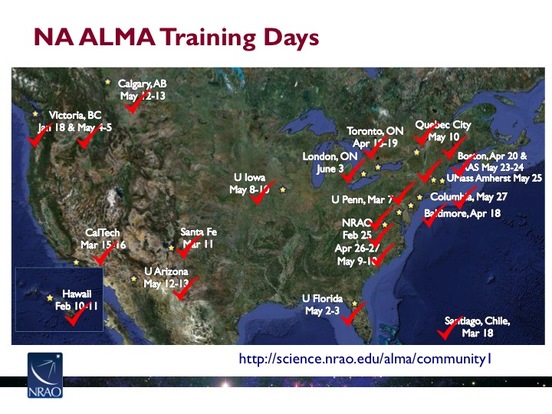 May was a busy month for NAASC staff who traveled throughout North America to present ALMA Early Science training to the community. Community Days were offered in ten locations across the continent last month - capping off a marathon of 22 training events in less than five months.

Contribution to Data Services: The NAASC Computing and Data Processing Team The data challenge posed by ALMA is one of the most severe in current astronomy. The size of the raw data is predicted to grow by ~200 terabytes per year. Unlike most astronomy facilities with this order of data volume, which tend to take uniform survey datasets, ALMA data is taken in a traditional, proposal driven manner, in a wide variety of user-specified modes. Only the EVLA archive will rival it in both size and complexity for the forseeable future. In addition, ALMA will be the first and only interferometric telescope with a pipeline capable of dealing with a wide range of observational setups. Although the main ALMA pipeline will be run in Santiago, the nature of interferometric data, and the many modes in which ALMA can operate means that multiple reprocessings of these data are to be expected. For North American users, these reprocessings will use the pipeline installation at the NAASC. The Data Services Group (DSG) coordinates the processing, archiving and distribution of ALMA data at the NAASC, and is also responsible for the development and maintenance of tools for proposal preparation, data processing and data analysis that are produced in North America, but are not part of the main ALMA project. These tools supplement the ALMA project software development effort, and currently consist of Splatalogue and the Simdata task (within CASA). Eventually, the DSG will also direct the effort within North America to produce tools to analyze the large datacubes ALMA will produce. The DSG also coordinates the deployment of the NAASC instance of the ALMA User Portal, and the provision of the ALMA helpdesk to the ALMA project. The DSG coordinates with the NRAO Computing and Information Services (CIS) division to ensure the provision of the hardware necessary to undertake the data transfer, processing and storage tasks, and to ensure that software environments are set up correctly to allow the pipeline and associated software to function efficiently. The NAASC will host a full copy of the ALMA archive, both to provide convenient local access to ALMA data, and to provide a backup copy to the main archive in Santiago (along with copies at the ALMA regional centers in Europe and Japan). Data storage will be through the Next Generation Archive System (NGAS), developed by the European Southern Observatory as part of their contribution to the ALMA project. The NGAS nodes will be linked to a fast Lustre file system that will act as a staging area for the data processing cluster. The exact details of the processing cluster are yet to be defined, but it is expected to be a near-clone of the main pipeline processing cluster in Santiago, with up to 64 processing nodes. There is a large overlap with the archiving, data processing and software interests within NRAO Observatory Science Operations. The NAASC DSG will be working with colleagues at the other NRAO sites to identify areas of common interest, and will also work closely with the Virtual Observatory (VO), its US incarnation, the Virtual Astronomical Observatory, and the ALMA archive development group to ensure the transparent integration of ALMA data into the VO. NAASC data services is currently a small group, consisting of 1.5 staff (Mark Lacy and Remy Indebetouw) and two postdocs (Robin Pulliam and Amy Kimball) with Mike Hatz and Dan Klopp matrixed in from CIS, but is expected to grow as the emphasis of the NAASC shifts from face-to-face user support during ALMA Early Science to supporting users remotely after the pipeline is fully operational. 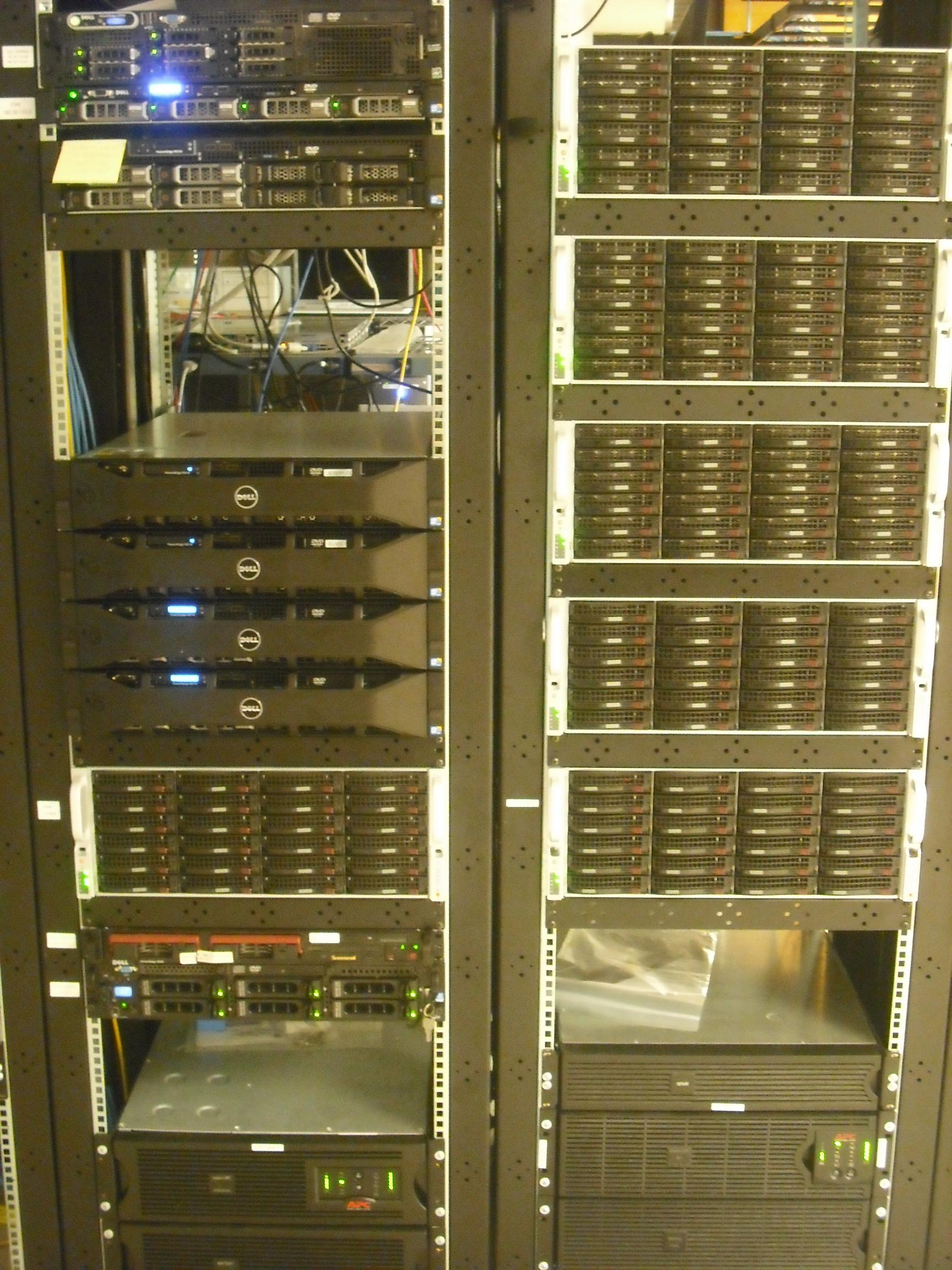 Figure 1. The Data Services racks at the NAASC. The left-hand rack houses the pair of high-availability servers for the helpdesk and user portal at the NAASC. The upper four boxes in the right-hand rack are the first installment of the NGAS storage nodes that will eventually house the ALMA archive. These machines will be joined within the next few months by the first of the pipeline processing cluster nodes and the high speed filestore for data processing.

The Canadian Contingent of the NAASC: Resources for ALMA Users at NRC-HIA
By Brenda Matthews 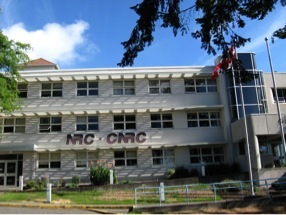 Caption: View of NRC-HIA's main building in summertime. Within the NAASC are some members proud to contribute ALMA support from foreign shores. These members are located in Victoria, Canada at the National Research Council of Canada’s Herzberg Institute of Astrophysics (NRC-HIA). The scientific expertise of the NAASC members at NRC-HIA is strongly focused on star formation and circumstellar disks through Group Leader Gerald Schieven and members James Di Francesco, Doug Johnstone and Brenda Matthews. There is a high level of interferometry experience within NRC-HIA as well.

ALMA users will interact with the NAASC members at NRC-HIA as they would any other member of the NAASC. Our efforts to date include the creation of the ALMA Primers (created at NRC-HIA, and now with contributions from the NA, EU and EA ARC) and facilitating the ALMA Tutorials for Early Science in Canada (akin to the Community Days in the US). Including the tutorial associated with the Victoria NAASC Conference on Spectroscopy in January 2011, we will have facilitated 6 ALMA Tutorials across Canada before the Early Science deadline. North American ALMA users will also interact with NAASC members at NRC-HIA through the Helpdesk.

NRC-HIA will be an alternative location for assistance in reducing ALMA data, particularly accessible to ALMA users on the west coast of North America. 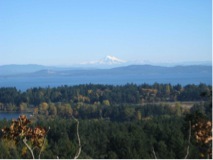