You are here: NRAO Public Wiki>ALMA Web>NAASC>DataServicesGroup>EarlyScienceBeams (2011-01-14, AlWootten) Edit wiki text Edit Attach Print version
Quantification of poor extended imaging: flux in center of image for Gaussian sources as a function of source size. Proposed ES configuration is not as bad as SMA, but it has twice the number of antennas so should do be able to do better. It is clearly much worse than CARMA. 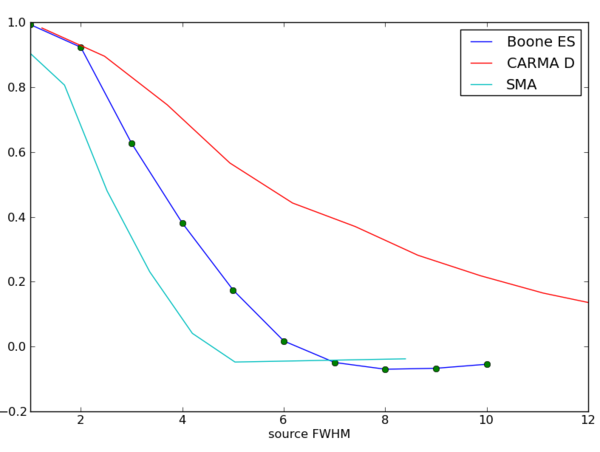 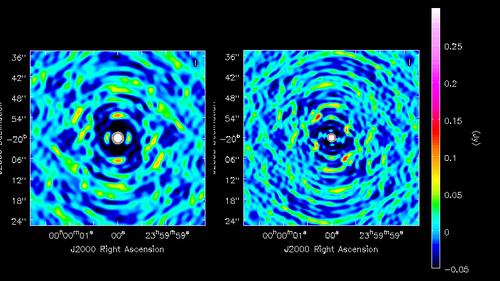 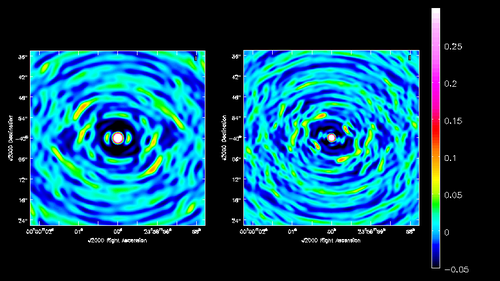 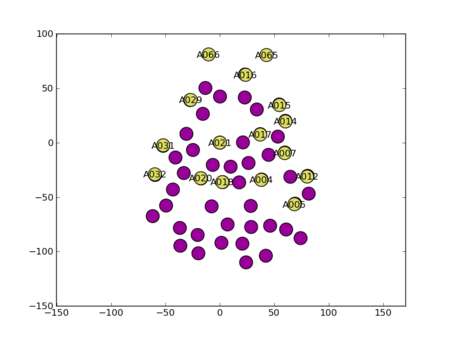 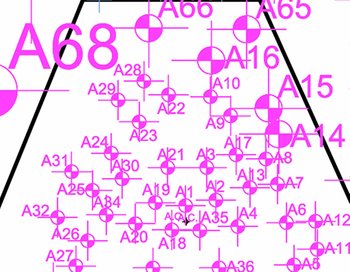 description of what he did is here: alma16ant.pdf
. Spreadsheet with antenna positions and baselines for the selected 16 and for all available antennas: I confirm that natural weighting produces the same beams as his "unweighted" in his document, and that the sidelobes are pretty high especially for a short (1h) observation: 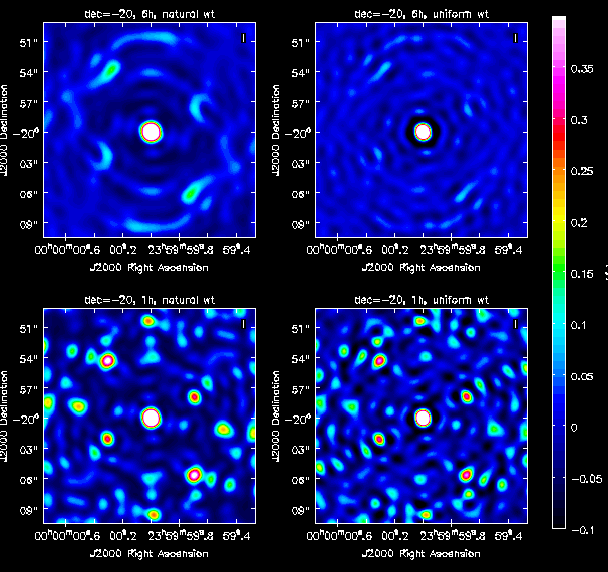 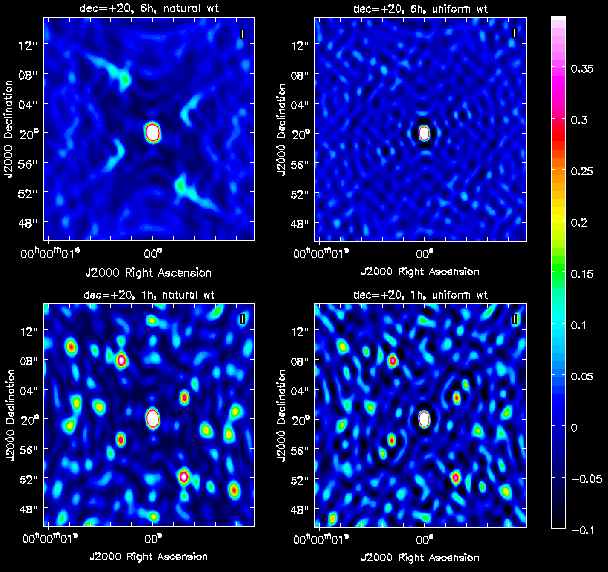 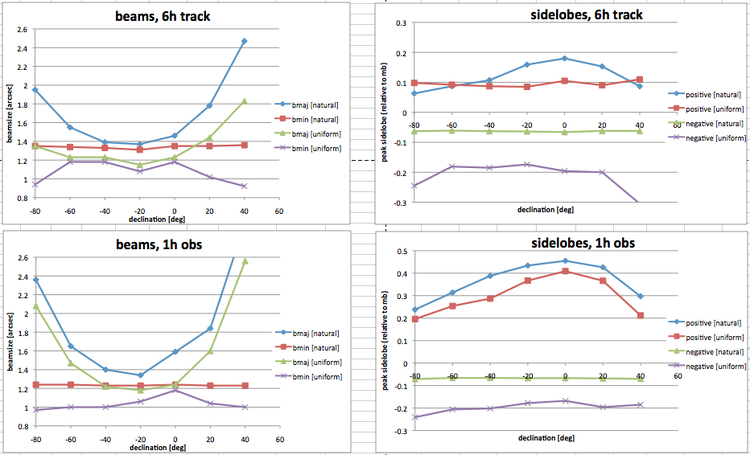 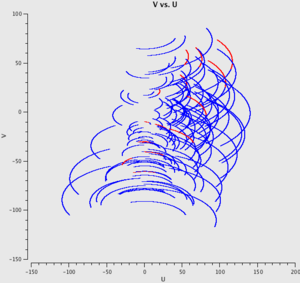 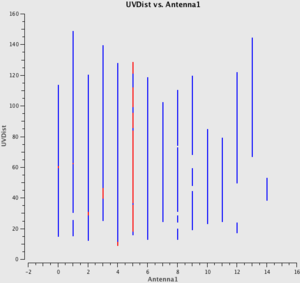 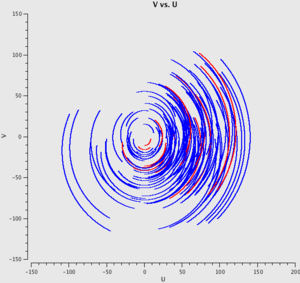 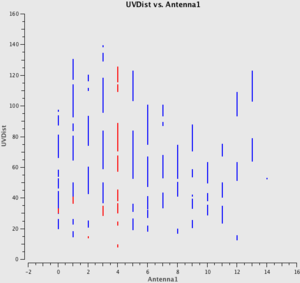 I cannot reproduce Frederic's radial uv densities - I see a much narrower FWHM than in his document, unless he didn't divide by the geometric 1/r factor or something: 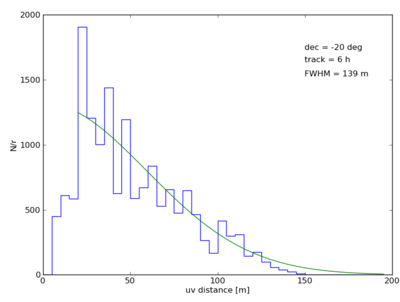 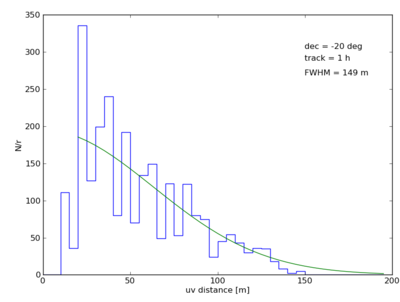 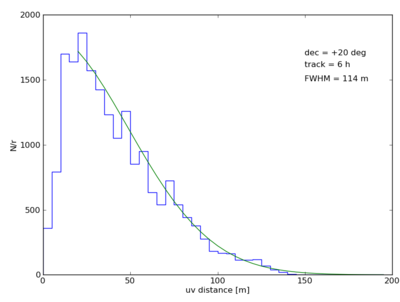 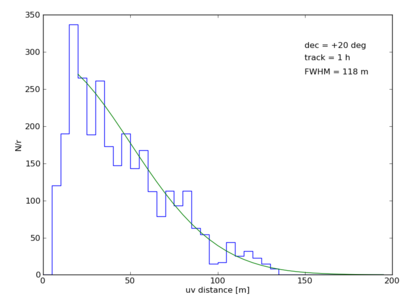 Next, I compare to CARMA

In general, their config is N/S elongated, so the beam is pretty noncircular at zenith, but its properties vary less dramatically with dec. The dec plotted for CARMA is (-23+37-(simulated dec)) to be compared with ALMA. CARMA's beam has a lower positive sidelobe, but a more negative bowl, so I don't know if I'd say one or the other is dramatically better, just different: 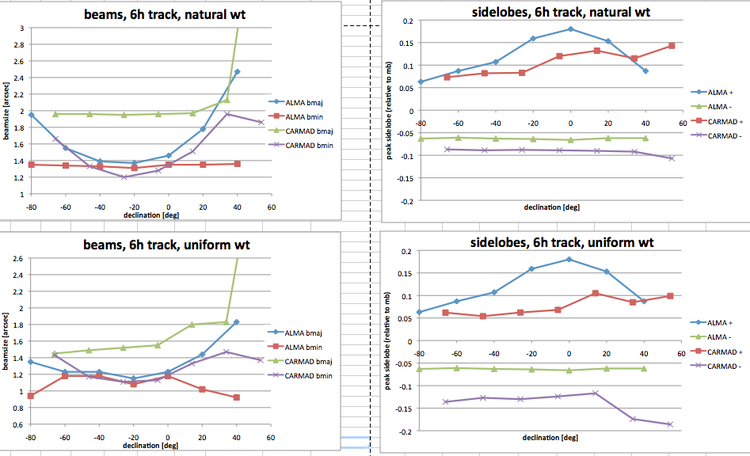 comparison of radial uv distribution. CARMA has been scaled to approximately the same max baseline as ALMA. 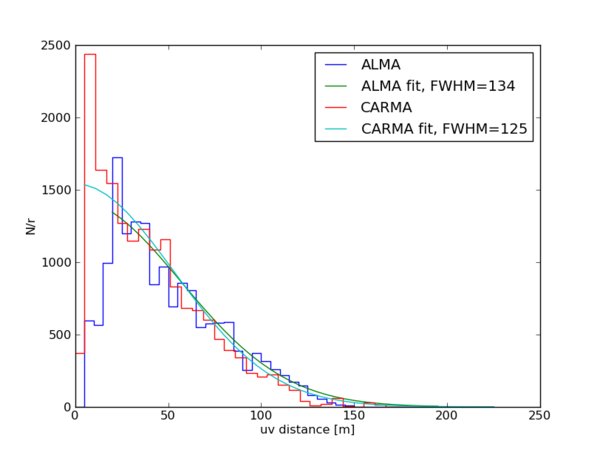 The original design 2006-06-20-ALMA-90.02.00.00-006-A-SPE had few constraints, and specified the shortest baseline:
SCIG-00060-00/R An antenna pad separation of 15.15m shall be possible. For the compact array of 50 antennas, the configuration was sidelobe-optimized, in contrast to the Boone ES process: The positions of the ... 50 pads within the compact array were then optimized to give minimum sidelobes after multiplying the beam pattern with the autocorrelation of the primary beam (see Woody 2001, ALMA Memos 389 390). The sidelobe optimization used a modified version of the Kogan algorithm (see Kogan 1997, ALMA memo 171) . The algorithim was improved to minimize simultaneously a group of the largest sidelobes. The beam optimization was done within constraints of antenna proximity (taking into account both initial pads and reserved pad positions), antenna transporter access and no shadowing at transit for sources up to declination +15deg. When a moved pad violated these constraints it was returned to the original position. Two independent studies performed by M.Wright using MEM in MIRIAD (ALMA memos 428, 430) and S.Guilloteau using CLEAN in GILDAS,using arrays of similar design gave excellent imaging performance at all intermediate declinations. A particularly novel aspect of ALMA is its B9 capability. The beam is quite small at that band and many sources will be relatively extended. The atmosphere can be unforgiving, compromising our ability to make use of foreshortening to provide shortest spacings. Total power capability of ALMA has yet to be proven and in any event will be most difficult at the highest frequencies. I think there should be a constraint for the ES cycle 0 (ES0) compact array to provide excellent short spacing response. I note that requirements for B9 might warrant tracks somewhat shorter than +/- 3 hr but that is not a bad goal. I think Frederic's design has too few short spacings. It was optimized for 6 hours of observation around transit. Boone states that the largest baseline available is 145m, that the uvplane may be sampled at a rate Nyquist/1.5 and that the samples may be distributed in a gaussian of FWHM=163m. This is a truncated gaussian, so there will be sidelobes. I think that the ES0 design should address short spacings more than the maximum spacings. Although beamshape was a constraint for the full array design, it needs to be more carefully considred in theES0 configuration design I think. This graph shows the spacings available from the pads expected to be utilizeable at ES and the spacings in the Boone design, clearly a subset of the available spacings which is skewed to longer baselines: 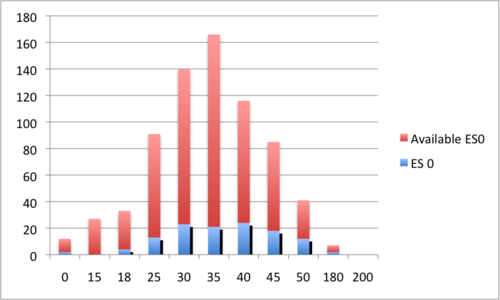