Summary: Current models for Uranus are good to about 5% in the millimeter/submillimeter. Neptune has issues as its spectral line emission is only now being incorporated into models. 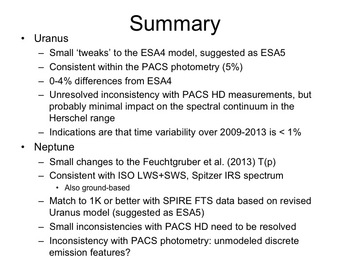 The following from Glenn Orton Two things are important priorities for Uranus: One is to determine the variability of temperatures "at depth" (something like the 1-bar pressure level). For this purpose, getting a resolved image at any frequency longward of something like 25 cm-1 (750 GHz) would provide a map of temperatures, because the spectrum in this region is overwhelmingly dominated by emission from the H2 collision-induced absorption. So, changes in the radiance can only be the result of changes of temperature, as the H2 abundance is uniform across the planet. "Confusion" by small amounts of stratospheric H2O are tiny. This is important in order to determine the variability of the disk-averaged spectrum of the planet as it went through changes of its aspect as a result of seasonal variability (recall Uranus' axial tilt is 98 deg. ). Over the course of the Herschel mission, this could have been responsible for as much as 1.5% variability, or less than 0.2%, depending on how far apart temperatures in different regions are. This is also important for Neptune in general, although over the course of the Herschel mission, its flux is unlikely to have changed much. Another, arguably more important measurement - but possibly not in the aegis of ALMA, is to get a moderate-resolution but very precise spectrum over the 5-15 cm-1 (150450 GHz) range in order to detect any broad spectroscopic features belonging to H2S or whatever else is creating the (currently unknown) absorption in that region. Note that the green filled circles are from Gene Serabyn's nice work, but they are still too noisy to detect any of the subtle features of the H2S lines. I note again that H2S or PH3 are the most likely candidates for absorption in this region, but those are guesses based on cosmogonic arguments from the expected inventory of elements and the chemistry they form. A little lower in priority (because we may be getting this information from the SMA) is getting spatial variability in this region, which is important for the same reason as temperatures, to track variability over the course of the mission. Spatial variability for Neptune in this region is useful, as well, although the additional absorption in Neptune doesn't appear to be necessary. Measurements of spatial variability in Neptune would detect variability in temperatures at pressures greater than 1 bar (maybe 2-3 bars), which is also useful and pretty extraordinary for understanding Neptune's dynamics. The general measurement requirements for these observations are:

Need information from Mueller The following from Thomas Mueller Subsurface Emission: Subsurface emission is not well modeled at the moment and needs further investigation. The wavelength where the subsurface emission starts to play a role is not clear and it might even be object dependent. I would guess it is around 200-500 micron. This will be investigated via the combined PACS and SPIRE data. But since both instruments have different calibration schemes (SPIRE: Uranus & Neptune; PACS: stars) we first have to get more confidence in the absolute levels and the related cross-calibration aspects. I plan to write up what I presented in ESAC in end March for the calibration workshop proceedings. I expect to receive the final(?) SPIRE fluxes in May, hopefully on time for a submission in end June.

The following from Thomas Mueller Possible target list: Ceres, Pallas, Vesta, Lutetia. The ESAC calibration conference proceedings paper might be a good starting point for sketching out an ALMA observing plan for these asteroids. I would see two key elements for ALMA: This would allow us to access the frequency related aspects as well as the time-stability aspects. It would also allow us to establish a procedure on how to exchange information and to learn about the possibilities and limitations on both sides.

NOTE: 2013/04/18: 3mm flux predictions from Cohen are wrong. Cohen has recalculated, yielding the results listed in the table below. Bold = Measured to have excess millimeter/submillimeter continuum flux (i.e. active chromosphere)

Measured 2012/11 at 105, 220, and 340 GHz. Measured/predicted fluxes in mJy... Looks like HD71129 has excess flux at longer wavelengths, a hallmark of active chromospheric excess. As this star is only a early giant (K0), one might expect it to have an active chromosphere.

The Structure of the Outer Layers of Cool Standard Stars (Dehaes etal. 2011) analysis suggests that Alpha Boo has excess continuum emission at wavelengths greater than about 800 micron.

The Structure of the Outer Layers of Cool Standard Stars (Dehaes etal. 2011) analysis suggests that Alpha Ceti has excess continuum emission at wavelengths greater than about 800 micron.

In the following I repeat a now ancient, though still relevant, discussion regarding options for flux calibration sources. For a lucid discussion of this topic see the presentation on Astronomical Calibration Sources for ALMA given by Bryan Butler at the 2003 ALMA/HIFI Calibration Meeting. A good flux calibrator has the following properties: At millimeter and submillimeter wavelengths, few if any sources meet all of these criteria. The current generation millimeter interferometers calibrate flux using variants of the following procedure: This calibration procedure is just an extension of the flux calibration system used with millimeter and submillimeter single dishes. The key step in this calibration scheme is the determination of the flux of the primary calibrator (the planets in the above). Unfortunately, determination of the flux of a planet is not straight forward. As is the case for the VLBA, the high spatial resolution achievable with ALMA presents a fundamental problem in that most of these possible primary flux calibrators are highly resolved at the maximum resolution of the array -- for example, the 3 km baseline corresponds to 8.5 X

at 850 GHz or an angular resolution of 24 mas. Even most quasars show structures at these scales and are highly variable.