WARNING: UserWH2O doesn't have anything to do with the actual atmosphere being modeled. But somewhat mysteriously, some variables scale with it, and others do not, and you better know which, since its not documented (except here, to my knowledge) So far so good, since SkyStatus is (as far as we can tell) designed for experiments like WVR phase correction, where one has a prediction of WH2O to compare with the real WH2O. Here's a plot of WetOpacity taken from the RefractiveIndexProfile, and taken from SkyStatus, just setting userWH20: 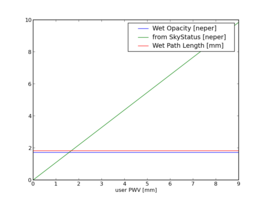 However, things rapidly get less intuitive: All of the following come from SkyStatus: 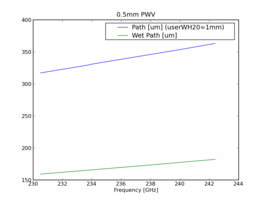 On a different note, since you can't apparently initialize an atmosphere to have the PWV that you want, you have to pick the right humidity to get a specific PWV. Ever wonder how PWV relates to % humidity:? Here's the plot, with all the other atmo parameters left at their defaults: The proportionality constant is Ground WH20 [mm] = 0.07838 +/- 0.00018 times humidity in % 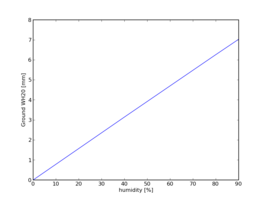