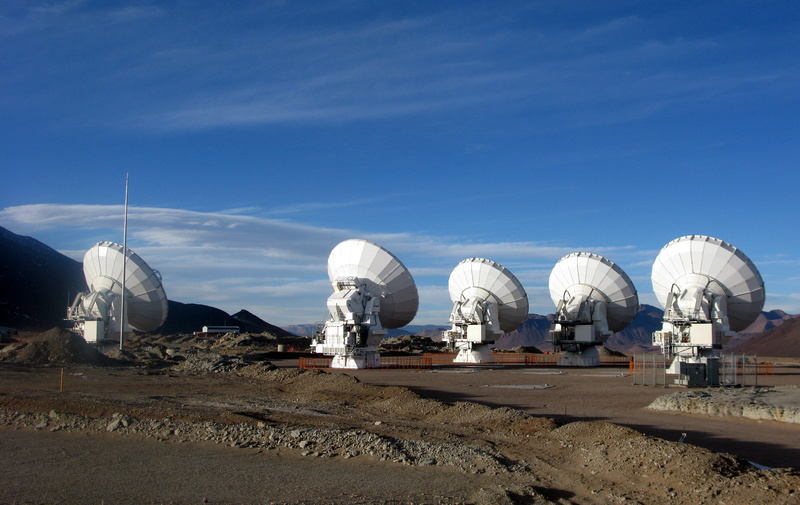 Five ALMA antennas in operation at the AOS, seen in this photo taken by Nick Whyborn on 3 June. See other images and animations.

ALMA and the First Galaxies Authors: F. Combes (LERMA, Obs-Paris) Abstract: ALMA will become fully operational in a few years and open a new window on primordial galaxies. The mm and submm domain is privileged, since the peak of dust emission between 60 and 100 microns is redshifted there for z= 5-10, and the continuum benefits from a negative K-correction. At least 100 times more sources than with present instruments could be discovered, so that more normal galaxies, with lower luminosities than huge starbursts and quasars will be surveyed. The high spatial resolution will suppress the confusion, which plagues today single dish bolometer surveys. Several CO lines detected in broad-band receivers will determine the redshift of objects too obscured to be seen in the optical. With the present instrumentation, only the most massive and gas rich objects have been detected in CO at high z, most of them being ultra-luminous starbursts with an extremely high star formation efficiency. However, selection biases are omni-present in this domain, and ALMA will statistically clarify the evolution of star formation efficiency, being fully complementary to JWST and ELTs. Resolved images of self-gravitating circumstellar discs with ALMA Authors: P. Cossins, G. Lodato, L. Testi In this paper we present simulated observations of massive self-gravitating circumstellar discs using the Atacama Large Millimetre/sub-millimetre Array (ALMA). ... We find that at 345 GHz (870 $\mu$m) spiral structures at a resolution of a few AU should be readily detectable in approximately face-on discs out to distances of the Taurus-Auriga star-forming complex.